Inside Tract - A toxin target for deadly E. coli? 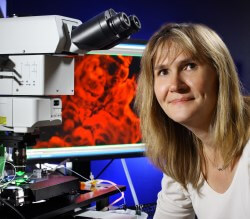 "It's both amazing and awful," says Olga Kovbasnjuk, "how cleverly the system has evolved to survive and kill us."

Spinach. Sprouts. Hamburger. Apple cider. The foods that carry the virulent strain of otherwise benign E. coli bacteria are varied and unpredictable. As Inside Tract went to press, Europe was still searching for the carrier of the most hazardous enterohemorrhagic E. coli (EHEC) variety to date, one that killed at least 30 people.

“But since lives are lost while you search for the source of contaminated food,” says molecular biologist Olga Kovbasnjuk, “you’re better off tackling the bacterial infection itself.”

And there, she says, the story gets more unsettling. Just 10 to 50 bacteria can cause illness. They can survive even gastric pH. Many EHEC strains resist the usual antidiarrheal antibiotics.

Fortunately, Kovbasnjuk’s expertise has led her to drill deeper for possible pharmaceutical targets, to the infections’ basic science. Can EHEC be kept from adhering to gut epithelium? What about targeting the toxin they produce?

Kovbasnjuk has tackled the latter first, focusing on the Shiga toxin that EHEC creates and how it gets into cells and beyond. “It’s both amazing and awful,” she says, “how cleverly the system has evolved to survive and kill us.”

First, the background: Though virulent E. coli contain Shiga toxin, their DNA doesn’t code for it. Rather, the toxin is a byproduct of a bacteriophage (bacterial virus) that quietly infects the bacteria. How much toxin can vary. Antibiotics, for example, indirectly prompt the ‘phage to replicate, an act that ironically creates “a million times more toxin,” Kovbasnjuk says. “Giving antibiotics makes things worse.”

Shiga toxin works through gut cells, tripping a response that results in the sudden, often-bloody diarrhea that’s characteristic. Then, slipping into adjacent blood vessels, the toxin docks with receptors in the kidneys and even some in the brain, possibly leading to, respectively, kidney failure or lethal seizures.

In showing how the toxin enters gut cells, Kovbasnjuk’s latest work is on a path to prevention. Basically, she’s discovered that E. coli’s sidling up to intestinal epithelium initiates changes in those cells. The bacteria affect the structural actin protein that normally defines the cells’ brush borders, causing it to pool instead as visible “blebs.” Kovbasnjuk speculates that the newly flattened cell surface gives E. coli a better “purchase.”

In this remodeling, also called macropinocytosis —“big cell drinking”—actin gets reabsorbed. And the Shiga toxin?  Released from the bacteria, it randomly settles onto the pooled actin, Kovbasnjuk explains. Accompanying it to the cell interior, the toxin is now home free.

“Now we’re trying to map the molecular mechanism—from both host and bacterial point of view—that trips macropinocytosis,” she says.

Already, Kovbasnjuk’s team has revealed many of the proteins involved, and has several inhibitors of the process to look into as therapy.