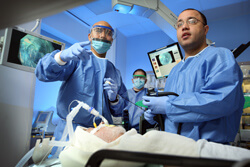 For patients like Connie Mills, achalasia can take over. The motility disorder affecting one in 100,000 people causes the lower esophageal sphincter to tighten, preventing the propulsion of food to the stomach. Patients report trouble swallowing, chest pain, weight loss and regurgitation.

Mills learned to carry paper cups to catch food backflow, and her ability to eat meat had dwindled to “paper-thin turkey in a lot of gravy.”

In 2012, Mills became the first patient at Johns Hopkins and one of a handful in the U.S. to be treated with a newer procedure called peroral endoscopic myotomy (POEM). During the 90-minute operation, gastroenterologist Mouen Khashab uses an endoscope tipped with a needle-knife to cut the mucosa 5 inches above the sphincter, then tunnel through the esophageal wall to remove the inner circle of muscle from the lower part of the esophagus and upper part of the stomach. The procedure relieves tightness, once again allowing the passage of food to the stomach. All that’s needed to close the esophageal lining are a few endoscopic clips, and many patients can leave the hospital after just one night.

The procedure is the brainchild of Johns Hopkins gastroenterologist and neuroscientist Pankaj “Jay” Pasricha, who started experimenting in animal models when he worked at Stanford. After Pasricha presented his work at a professional meeting in Australia in 2007, endoscopic surgeon Haruhiro Inoue began using the technique in patients in 2008. Inoue visited Johns Hopkins last year to guide Khashab and Division of Gastroenterology and Hepatology Director Tony Kalloo through the procedure on Mills, who reported ease in swallowing a few days later. Since then, they’ve performed an additional 79 operations.

POEM also can be used in the treatment of other spastic esophageal disorders.

“We think this procedure is going to take over surgical myotomy,” Khashab says. “It’s at least as effective, we have durable outcomes, patients are safe in good hands and there is no need for an incision.”

To see a video about POEM featuring Mouen Khashab, visit bit.ly/Peroral_Endoscopic_Myotomy. To refer a patient, call 410-933-7495.