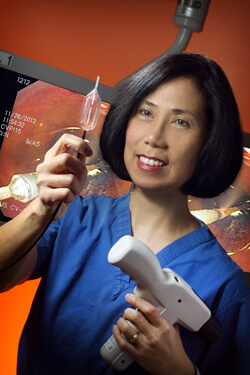 1 2
Mimi Canto and the coldproof cryoballoon.

Johns Hopkins doctors are making inroads into a therapy that shows promise for patients with Barrett’s esophagus and esophageal dysplasia.

Almost 10 years ago, the hospital’s physicians and researchers were among the pioneers of endoscopic cryotherapy for patients with these conditions.

Standard therapy for Barrett’s around the world is radiofrequency ablation (RFA), which uses heat from the radiofrequency energy to burn away the abnormal mucosa. Over the past 10 years, countless patients have undergone successful RFA procedures and have replaced Barrett’s cells with healthy squamous cells, obviating the need for esophageal surgery in many cases with high-grade dysplasia.

But Canto says RFA has its downsides. Post-procedure pain, bleeding and difficulty swallowing from scar tissue induced by RFA are all side effects. The therapy is not ideal for treatment of invasive esophageal cancer due to the superficial depth of injury. It can also result in esophageal stricture formation in up to 12 percent of patients. On top of that, says Canto, the procedure is very expensive.

Canto’s Endoscopy article reports its success: In 20 patients who have had no prior ablation, “Polar Wand” carbon dioxide ablation treatments that freeze Barrett’s esophagus mucosa have resulted in 100 percent success for patients with high-grade dysplasia after three-year follow-up.

And, says Canto, patients who have had unsuccessful RFA therapy have also benefited from cryotherapy. Forty-four patients with prior heat ablation have had cryotherapy at Johns Hopkins. After one year, 91 percent of them had no recurrence, and at three years, 84 percent remained free of Barrett’s esophagus.

“We can conclude that endoscopic cryotherapy is a safe and effective ablative therapy for both Barrett’s esophagus and esophageal cancer,” says Canto. “Cryotherapy is something we believe in.”

Today, the team is taking it one step further: cryoballoon focal ablation.

“We use a through-the-scope balloon and nitrous oxide gas to do the freezing,” says Canto. “The balloon allows the gas to be contained and the flow rate to be controlled through a small aperture. You can point right at the target. It’s contact ablation, as opposed to Polar Wand cryotherapy, which a is a noncontact freezing technique requiring removal of excess carbon dioxide.”

Canto says the balloon cryotherapy allows flexibility in the extent and location of treatment. “You can rotate the catheter, allowing you to hit very specific spots, as well perform circumferential ablation when you need to.” The cryoballoon system is also highly portable and less expensive. Preliminary results from a multicenter international trial in patients with Barrett’s esophagus suggests it is highly effective and well-tolerated. Very early clinical experience in patients with esophageal squamous dysplasia also suggests this might be an important indication, with potential worldwide impact.