Inside Tract - A Firmer Grip on Cancer Diagnosis

A Firmer Grip on Cancer Diagnosis 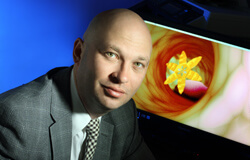 Doctors and engineers from Johns Hopkins have developed a mechanical technology aimed at producing better data from biopsies. Rather than a few single-needle samples, the new approach gathers hundreds — even thousands — of samples from many sites. Dust-sized metallic “microgrippers” are set loose via an endoscope and spread uniformly into a hollow organ, such as the colon, esophagus or even hard-to-reach areas like the bile duct.

After a few minutes, when the heat-sensitive microgrippers reach a certain temperature, they drift to the walls of the organ and snap shut, each securing a small tissue sample containing valuable diagnostic information. The endoscopist then uses a magnet to collect the metal microgrippers, still clinging to their payloads.

David Gracias of the Johns Hopkins University Whiting School of Engineering and the team in his lab began creating these “self-folding structures” more than 10 years ago.

“When we first started this work, some people thought it was crazy,” says Gracias. “We’re letting surgical tools go free in a patient’s body. That’s the opposite of what everyone else is doing.”

Gracias and Florin Selaru of the Division of Gastroentrology and Hepatology are now collaborating to refine the use of microgrippers through a recent National Institutes of Health (NIH) research grant.

“The idea is to take many, many, many biopsies so we make sure we aren’t missing anything,” Selaru says. “We look at the cytology. But we also look deeper than that. We process the cells for their DNA and look for genetic mutations,” he says. “This is the personalized molecular biology approach that I believe is the future of cancer diagnosis.”

Because biopsies rely on two factors in their search for cancer — random tissue samples and the ability to visually spot abnormalities — diseased tissue is sometimes not collected or lesions are too small to see, and dangerous cancers can go undetected. Microgrippers offer tissue samples from many more spots and provide a more comprehensive picture of the cells and the genes of the organ.

According to Selaru, the recent NIH funding will be used to perform the research and refinements that the FDA requires to bring the microgrippers to phase 1 clinical trials.

“This is as close as we’ve gotten,” Gracias says. “It’s an entirely new concept, and we look forward to trials. We don’t know when that will be, but we antipicate that, after some more work to prove safety and their effectiveness, we can begin.”

Selaru says the cytology info the tissue samples yield will be important, but he’s especially enthusiastic about the ability to better identify more of the early genetic markers of cancer.

“In recent years, we’ve seen phenomenal genetic and epigenetic information advances regarding human disease, particularly in cancers,” he says. “We envision that the statistical sampling performed with the microgrippers, coupled with biologic analyses of various RNA and DNA markers, will revolutionize diagnostics in medicine.”