Inside Tract - The Benefits of Fecal Transplant

The Benefits of Fecal Transplant 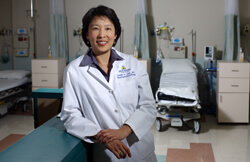 Chronic diarrhea and colitis resulting from a Clostridium difficile infection can be difficult to treat. A course of antibiotics can often knock out one set of problems but cause a whole new set by disturbing the gut's microbiome.

That's why Linda Lee, director of the Johns Hopkins Integrative Medicine & Digestive Center, is a proponent of restoring colon balance through fecal transplantation as a treatment for recurrent C.difficile colitis.

"We harvest stool from a healthy donor, since they have all the right bacterial strains in them," Lee says, "and we put it inside the colon of a person with recurrent C.difficile. The procedure itself is simple, the same as undergoing a routine colonoscopy; we're doing them mostly in the outpatient setting."

Studies show that about 30 percent of people with C.difficile infection will relapse when treated with the usual rounds of antibiotics. "Within several weeks," Lee says, "they're back to having diarrhea again and their stool is positive for the C.diff infection."

According to Lee, many people who get recurrent C.diff are over 65.

"We've seen a dramatic increase in mortality related to C.difficile colitis over the past 10 years," she says. "Mortality is highest in those over the age of 65." The CDC says that 13,000 deaths were due to the infection last year.

Many of the antibiotics the U.S. Food and Drug Administration has approved to treat C.difficile infection cost thousands of dollars and sometimes are not fully covered by insurance or Medicare.

"So not only are you not getting better, but you're putting out huge amounts of money for repeated courses of antibiotics," Lee says.

Lee adds that patients with chronic antibiotic-associated diarrhea are often so desperate for relief that they don't blink when fecal transplantation is proposed.

"I don't find many patients who are squeamish about it," she says.

Fecal transplantation is not without some risk. "It's akin to early days of blood transfusion. No one knew there was any such thing as hepatitis C, for instance." she says. "And a lot of people got HCV through blood products. There may be organisms in our gut microbiota that we haven't discovered yet." Scientists are just beginning to understand that gut bacteria play an important role in many diseases, so fecal transplantation could have future unanticipated health consequences.

"I've seen so many patients who have benefited from this," Lee says. "The patients and their families are so grateful to not have debilitating diarrhea. We're really talking about improving the quality of life."