Inside Tract - Rebooting the Immune System for Severe Crohn's Diseas 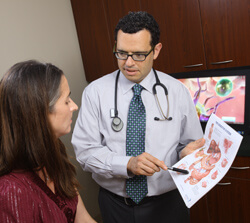 The great majority of people with Crohn's disease respond well to conventional treatment. But there may be new hope for patients whose Crohn's stubbornly resists traditional therapies.

Working with Johns Hopkins Medicine's Division of Oncology, gastroenterologist Mark Lazarev will this winter conduct a small trial treating patients by using a chemotherapy drug to wipe out nearly all of their faulty immune systems.

"We're going to get started soon with a trial of high-dose Cytoxan for use in severe medication-refractory Crohn's disease," Lazarev says. "But rather than follow that with a stem-cell transplant, we're going to let the patient's marrow and white cells come back on their own."

Research has shown that Crohn's patients who also have cancer have seen improvements when undergoing chemotherapy. "When they're on chemotherapy, their Crohn's disease is rarely active," he says. "It suppresses the immune system, which in Crohn's patients is often causing problems by reacting badly to food-borne bacteria."

The concept of chemotherapy treatment for patients who have the gastrointestinal disease but not cancer is not new. Doctors have used aggressive chemotherapeutic agents to wipe out a patient's bone marrow, taking with it the faulty immune system. But the treatments have next involved an autologous stem cell transplant, to begin regrowth of the system.

The traditional stem cell transplantation for Crohn's disease is followed by a few weeks of neutropenia and the risk of potentially deadly infections. "The low white cell count is a high risk for neutropenic fever," Lazarev says.

In proposing the new treatment, Lazarev points to groundbreaking chemotherapy protocols developed by Johns Hopkins hematologic oncologists Richard Jones and Robert Brodsky, where only lymphocytes are wiped out, sparing the stem cells of other blood cell lines.

Lazarev is optimistic about the treatment and is recruiting patients for the trial.

"Jones and Brodsky's results with other diseases have shown that this is as effective as autologous stem cell transplant, but probably safer because it minimizes that procedure's potential complications," Lazarev says.

Patients in the trial, which is approved by both the Food and Drug Administration and a Johns Hopkins Medicine Institutional Review Board, will need to spend at least a few weeks in the Baltimore area.

"We'll give four doses of Cytoxan over four days after which they will be closely monitored as the marrow recovers."

Then, the patient will be followed in the Johns Hopkins Inpatient/Outpatient Program.

"They'll come in almost every day for blood work," says Lazarev. "Their cell counts will certainly drop as a result of the Cytoxan. But then the marrow and cell counts come back on their own without transplantation, decreasing the risk of neutropenic fever and dangerous infection."

For the trial, Lazarev is recruiting 10 patients whose severe Crohn's disease has failed to respond to other medical therapy and who are not good candidates for surgery. Patients will be followed for a year with outcomes targeting safety, clinical efficacy and endoscopic healing.

Lazarev says that the treatment "is for very sick patients who have been through other treatments and for whom surgery isn't an option. They've either lost too much bowel to surgery already or they have too extensive disease."

If you have a patient who may be a candidate for this trial, please contact Mark Lazarev at mlazare1@jhmi.edu.