Inside Tract - Genetics of Gastric Cancer 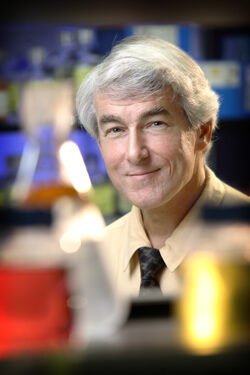 Stephen Meltzer envisions a day when physicians will look at the molecular level through the endoscope.

Everyone agrees that early detection is a key to beating cancer. But how early is early?

With gastric cancer, for example, examining biopsied gastric cells for signs of intestinal metaplasia is an important weapon. But Stephen Meltzer and the Early Detection Biomarkers Laboratory are looking deeper.

Rather than wait for the appearance of the goblet cells that indicate metaplasia, Meltzer and his team work on the genetics in the early stages of precancer. "What we do is look at the DNA and the RNA," he says, "and the way we've been doing that is a technique called deep sequencing, where you look at the whole genome at once."

Because all cancers of any organ are preceded by chronic inflammation, the work begins there. In the case of gastric cancer, that means Meltzer's team starts by looking at chronic gastritis, which can lead to intestinal metaplasia and ultimately to cancer.

The sequencing, a high-tech process that uses chemical reactions to expose a tissue sample's most infinitesimal details "tells you almost everything about the genetics of that tissue or cell," Meltzer says. "It tells you whether there are any mutations in the sequences, whether there are any gaps or deletions." Eventually, Meltzer predicts, this work will migrate from the research lab to patient care, helping doctors plot courses of action long before the appearance of irregular cells and precancerous lesions.

"These could be biomarkers for detection, to determine preventions or for therapy. The sequencing gives you much more comprehensive information than microarrays," he says, referring to the slides that are used to view DNA sequences.

Meltzer also sees a day not far off when such genetic information could be used to design molecular targets for individual patients.

"We're getting into the era of personalized medicine," he says, "where each person gets a different therapy. Soon, we'll use deep sequencing on every tumor to determine the best treatment approach. And we'll rule out all the therapies that won't work, rather than test them trial and error."

Meltzer also sees applications in endoscopy. Eventually, we'll be able to look not just at the microscopic level but at the molecular level all through the endoscope."

"It's really a new frontier," he says. "It sounds pretty fantastic, but it's coming."