Inside Tract - So Many Polyps in So Little Time

So Many Polyps in So Little Time 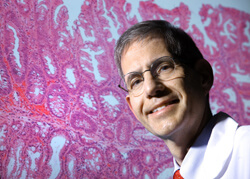 “Only about 400 cases of serrated polyposis are in the literature,” says gastroenterologist Frank Giardiello, who thinks the condition may be underreported. “Given the risk of colon cancer, it’s something we can’t ignore.”

Though serrated polyposis* (SP) is now on most gastroenterologists’ radar, the condition, marked by anywhere from a handful to dozens of characteristic colorectal polyps, still has “black box” overtones.

“We know that in serrated polyposis, polyps are confined to the large intestine,” says gastroenterologist Frank Giardiello, an expert in polyposis in its various forms. The types of polyps that appear are also known, as is the fact that at least one variety carries a heightened risk of morphing into colorectal cancer.

“But we still don’t know enough about the disease’s course,” says Giardiello, who sees at least one new person with SP each week. That recently prompted him and Johns Hopkins colleagues to undertake a review of 44 patients enrolled more than a year in a Hopkins colorectal registry. All had previous colonoscopies; they satisfied WHO criteria for serrated polyposis, based on family history—if any—on the type of polyps, their number and where they’re found.

A hallmark of the condition, as serrated conveys, is the distorted, sawtoothed pattern that appears in the crypt epithelium of most of the polyp intruders. These include hyperplastic polyps and sessile, serrated polyp/adenomas. The latter are premalignant, Giardiello adds, and are often right-sided and larger than one centimeter. “Because they’re flat—sessile—they can be hard to distinguish from normal epithelium.”

By the study’s end, the clinicians confirmed what they’d suspected: SP is hardly shy and retiring. At diagnosis, patients had an elevated number of the newly found polyps surgically removed, but the reappearance of growths in a short time could only be described as “relentless.”  In the roughly two years from the first diagnostic colonoscopy to the latest follow-up, serrated polyps reappeared in 83 percent of study patients. On average, their number increased by 40 percent per year.

As for cancer, “we found that the risk of it is high,” says Giardiello, who suspects that path leads from the hyperplastic polyp to sessile, serrated ones to malignancy. Others’ research supports that idea, but for now, the relatively small number of subjects in this study makes Giardiello more comfortable saying that “patients with SP have at least a moderately increased risk of colorectal cancer.”

Giardiello’s take-home message is this:

·      Patients with SP should have annual colonoscopies.

·      The risk of colon cancer is significant. Patients with overwhelming polyp numbers require a complete colectomy, leaving the rectum.

·      The chance of SP’s inheritance, though small, means regular colonoscopies for first-degree relatives.