Inside Tract - It's High Time for the Gut-Brain

It's High Time for the Gut-Brain 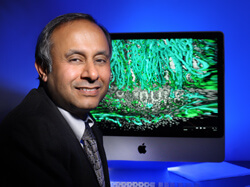 1 2
More than most, Jay Pasricha realizes the wide reach of the enteric nervous system—the “brain in the gut.”

We’re not yet blasé about the enteric nervous system.

For most of us, it still has a gee whiz quotient: Consider, for example, that the gut’s density of neurons matches that of the spinal cord, that intestinal neurons release 90 percent of the body’s serotonin and half  its dopamine.

Yet for gastroenterologist and neuroscientist Pankaj “Jay” Pasricha, interest goes beyond wonderment. He’s well along a number of paths that should translate understanding of “the enteric” into therapies.

Neurogastroenterology, the corresponding field, “challenges as much as it fascinates,” Pasricha explains. “Its learning curve is both steep and endless. And it touches more than abdominal pain, more than gastroparesis. It’s about the gut-brain axis and how changes there can affect mood, about the part enteric nerves play in obesity and diabetes, about neural stem cells.”

So the Johns Hopkins Center for Neurogastroenterology that Pasricha founded—one of few in this country—aims to relieve GI disorders well-rooted in the nervous system, like motility and pancreatic pain. Yet the view is more cosmic. Center studies also explore less obvious ties to the Great Diseases of diabetes, depression, Alzheimer’s and cancer.

Newly arrived from Stanford, where he directed gastroenterology and hepatology, Pasricha is a master endoscopist as well as a consistently-funded principal investigator. Head of a multicenter NIH-supported gastroparesis consortium, he also serves on the National Commission on Digestive Diseases. Pasricha wears another hat in directing the Center for Digestive Diseases at Johns Hopkins Bayview Medical Center.

Here we ask him about the field, his work and its scope.

Give us the 2-cent enteric nervous system (ENS) tour.

Most know about the nerve ganglia in the gut wall—the “little brain” of the submucous plexus—beneath the mucosa—and the myenteric plexus sandwiched in gut muscle layers. But we’re also interested in nerves to the viscera and the interstitial cells of Cajal—they interact with gut muscles in a very dynamic process that’s part of motility.

And the Cliff’s Notes, please, on function?

The ENS controls the secretion and peristalsis critical for swallowing, digestion, absorption and evacuating the colon. Dysfunction, then, contributes to irritable bowel, gastroparesis and a variety of disabling diseases. But there’s more: We’re increasingly aware of its hand in the pathogenesis of diarrhea and in inflammatory conditions. The flip side of the nerves is that they mediate local immune responses—a process called neurogenic inflammation.

How visceral nerves affect local tissues is something of a black box, you say. Can you give an example of where your new work is shedding light?

Yes. The ENS blankets the body with signals regarding metabolic processes—to the brain, liver and, likely, skeletal muscle and fat. Not surprisingly, its influence extends to disease conditions such as insulin resistance and type II diabetes—thus our focus on the pancreas. We’ve used 3-D microscopic deep-imaging to see how sympathetic nerves pervade the islets in the healthy organ. They abut both blood vessels and insulin-producing alpha cells there, which tells something of how they control insulin output. By contrast, in mouse models of diabetes, there’s clear, early remodeling of those nerves—changes that mimic human ones. So we anticipate a new approach to diabetes therapy—one based on changing nerve signaling.

We’re among the first with a model of painful chronic pancreatitis, of IBS and functional dyspepsia. All three help us understand the physiology of pain in these conditions and suggest new drug targets.

How far along are the therapies?

Various stages. But we are confident that in the next five years, we’ll have several new, first-in-kind drugs for neurogastro-influenced conditions.

Tell us something we probably don’t know.

Anxiety and depression are thought to contribute to irritable bowel syndrome and dyspepsia. But our studies are showing it may be the other way ‘round. Gastrointestinal irritation might actually spur the mood changes common in these patients. Brain-gut communication likely works both ways.