Inside Tract - Getting a Grip 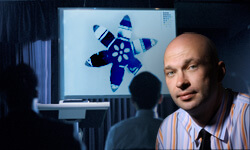 “The ‘grippers’ could bring a paradigm shift in disease diagnosis,” says Florin Selaru, pictured in front of a larger-than-life version.

We’re fascinated by the thought of spy drones as small as bumblebees—mechanicals that can whiz into a restricted area, gather information and return home without a stir. We’re hooked by products promising that thousands of scrubbing bubbles will clean our bathtubs as nothing else.

Now the possibility of such tools in the GI tract—and elsewhere—intrigues Florin Selaru. Think, for example, he says, of the exploratory colon biopsies that patients with ulcerative colitis must undergo to see if chronic inflammation has crossed into cancer. Typically, endoscopists forceps-biopsy as many as 30 random sites in the colon’s mucosa.

“But what if, instead, you could deploy hundreds of tiny, free-floating, metal-based “grippers,” each taking a fragment of tissue, with little or no trauma?” Selaru asks. A magnet would collect the grippers-plus-payload. And a day later, the molecular biology lab would report with new certainty whether or not the collected DNA contains cancer mutations.

This isn’t science fiction. Selaru, a gastroenterologist and molecular biologist, and his colleague Eun Ji Shin are some three years into a partnership with a Hopkins biomedical engineering team to develop and test miniature, self-operating biopsy tools, more appropriately called microgrippers to reflect their size. The project began when engineering’s David Gracias asked clinicians how chemo-mechanical devices that his lab had created might apply to surgical procedures. “One thing led to another,” says Selaru. “We’re now doing the groundwork that will let us take this to patients.

“Something was needed for pathologies that offer too little visual information,” Selaru explains. An endoscope can detect reddened mucosa, but is it early cancer or just inflammation? Only a biopsy can tell. Yet random biopsies may not adequately reflect disease. “Do you take 10 samples and call it a day?” he asks, “30? 100?” Increasing the number raises accuracy. At some point, however, damage to the mucosa becomes excessive.

Selaru cites a mathematical simulation—one helpful in oil drilling and space exploration—that shows that it takes up to 1,000 samples to avoid overlooking a specific pea-sized site in the human gut. The value of the tools, then, isn’t in question.

How do they work?

Basically, Gracias’ team has layered two ultrathin metallic films—chromium and gold—each with a different intrinsic strain. The same photolithographic process that creates microchips can turn out hundreds of microgrippers on a single sheet. Normally, each gripper would arch into its most stable position. That’s prevented, however, by an added third polymer layer. In practice, the devices are stored on ice, which keeps them flat. Introduce them endoscopically into the warm GI tract, though, and they curve like fingers as the polymer softens—in short, they grip!

Does the technique work? So far, yes, in lab situations. And preliminary work suggests that grippers can be guided with magnets to retrieve tissue from next-to-impossible spaces, like the biliary tree.

“There’s much to fine-tune,” says Selaru. “But we’re committed to get this all worked out. And, of course, we’re excited.”