Inside Tract - Getting a Handle on Obesity

Getting a Handle on Obesity 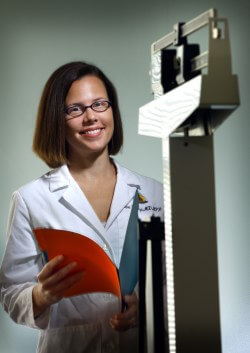 In its most recent Behavioral Risk Factor Surveillance System survey from 2008, the CDC reported that adult obesity in the United States is still on the rise, continuing an alarming trend that began in the mid-1980s.

Back then, eight states reported adult obesity at between 10 percent and 14 percent. Within a decade, those figures had jumped to half the country reporting obesity rates in the 15 percent to 19 percent range. Today, 32 states have obesity prevalence numbers in the 25 percent range, and six states are above 30 percent.

The stats—startling both for their high percentages as well as the relatively short period of time it took them to get there—have meant the emergence of obesity medicine and physicians like Mary Margaret Huizinga who are tackling the condition at every angle.

“Make no mistake,” Huizinga says, “obesity is a medical condition as devastating and debilitating as cancer or heart disease.”

More important for Huizinga and the other specialists who are part of the program is that the center is designed around and for obese patients. “We look at obesity as a medical condition,” she says, “which means we’re aware of the complexities and comorbidities.”

With diseases like diabetes, hypertension and fatty liver disease, Huizinga notes, obesity may be either a cause or an effect. Many times, she adds, providers may have tried to address one or another of those conditions through traditional therapies, but their patients remain obese.

“Or they try to address the obesity without understanding and treating the comorbidities and risk factors,” she says.

Among the roles of Huizinga and her colleagues is helping physicians determine whether their patients are suitable for bariatric surgery; other times it’s taking a close look at difficult nutrition issues like gastric dumping syndrome that may occur postoperatively.

But the center also has another, equally important mission.

For too long, Huizinga says, one of the reasons that obesity has been a poorly treated condition “is the bias that physicians—just like anyone else out there—have toward their obese patients.”

That bias, which Huizinga and Hopkins colleagues documented in a study published in the November 2009 issue of the Journal of General Internal Medicine, may have a significant effect on how successfully physicians treat and manage their obese patients. How to change it? Huizinga says the first step is to understand that it’s there in the first place.

At least part of the center’s goal is to educate other doctors, particularly primary care doctors who are on the front lines. Many of them struggle with what to do for their obese patients, Huizinga notes.

“We understand that and want to help,” she says. “It takes time to develop the skills and interaction required for caring for obese patients—that’s why we’re here. We’re not stigmatizing obesity. We’re aiming for solutions.”