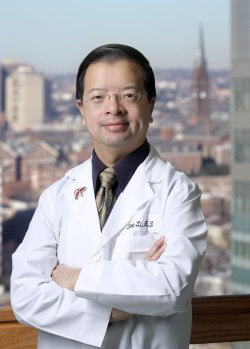 Zhiping Li is focusing on the mechanisms that feed diet-induced obesity.

Not long ago, nonalcoholic fatty liver disease was the near-exclusive province of older adults. Today, it’s also occurring among young people and children in the United States.

Considering that the single greatest risk factor is obesity, says hepatologist Zhiping Li, “we shouldn’t be too surprised by this trend since we’re seeing more young people becoming overweight and obese.”

This “growing” trend may not be cause for surprise, but it’s clearly cause for concern, Li says. Affecting about 29 million Americans—not counting the kids—nonalcoholic fatty liver disease is the most common cause of chronic liver disease. And, between 10 percent and 15 percent of those cases will progress to cirrhosis and liver failure.

Adding to the challenge, Li says, is the fact that diagnosis of nonalcoholic fatty liver disease is frequently accidental. He now recommends that all people who have risk factors  be tested, whether by routine liver function test, ultrasound or CT scan, or ultimately liver biopsy, which remains the gold standard.

“The bigger problem occurs when there’s other co-existing liver diseases,” says Li. “Combine that with undiagnosed nonalcoholic fatty liver disease and the risk for something more severe increases.”

“In part, we’re trying to learn more about the mechanisms of diet-induced obesity,” he explains. “But we also need better and more accepted interventions.”

Last year, Li and colleagues published findings from an animal study on the impact of probiotic therapy on high-fat diet-induced obesity, fatty liver and insulin resistance.

“We believe our results may have profound implications for the management of obesity-related fatty liver diseases,” he says. “And, if nothing else, it certainly can’t hurt to add probiotics to your diet.”