Where Pelvic Pain Meets Its Match 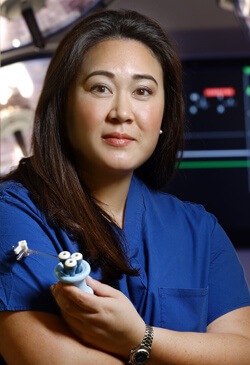 Gynecologist Stacey Scheib points to a recent patient case as an example of how multidisciplinary care can best help women with pelvic pain.

By the time the woman came to see Scheib, she was in so much pain that she could barely sit down in a chair. On initial exam, her pelvic floor was so much in spasm and tender that Scheib was unable to fully assess her pelvis. So Scheib coordinated a series of steps with Johns Hopkins experts to help her.

Scheib then was able to perform a more extensive assessment of the patient’s pelvis and obtain an MRI scan, which revealed a tender cervix scarred to the surrounding tissues and a right-sided pelvic mass. Finally, Scheib performed a robotic-assisted laparoscopic trachelectomy, extensive lysis of adhesions and excision of a solid retroperitoneal endometriosis mass. Today, the patient is nearly pain-free.

“Any one intervention would not have resolved her pain, but together they have provided the relief the patient was seeking,” says Scheib. “She can now sit in a car comfortably, ride her bicycle and play with her grandchildren.”

The Johns Hopkins Center for Chronic Pelvic Pain treats many of its patients similarly, says Scheib, noting that pelvic pain often stems from more than one cause: “Sometimes it’s like peeling the layers of an onion. We resolve one issue and it reveals another one.”

Following an initial visit, Scheib and colleagues with the center unify any needed treatments with other departments and divisions, including chronic pain anesthesiology, urogynecology, pelvic physical therapy, the compounding pharmacy, interventional radiology, neurology and gastroenterology. The center also works with a sexual dysfunction therapist and a pain psychologist.

According to a recent Gallup poll, the direct medical costs and lost productivity due to this condition were estimated at $880 million; out-of-pocket expenses were approaching $2 billion yearly. “It’s a huge issue but very undertreated and poorly understood, and physicians may not realize that there are experts in pelvic pain who can help,” she says.

Scheib and colleagues also are experienced in coordinating care with physicians in other cities, for patients who travel to Johns Hopkins for evaluation but live out of town.