GYN Innovations - To Preserve Fertility in the Youngest Oncology Patients

To Preserve Fertility in the Youngest Oncology Patients 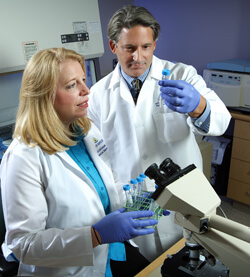 Mindy Christianson and Jeffrey Lukish are studying whether eggs can eventually be retrieved from frozen ovarian tissue harvested from young girls before they undergo cancer treatment.

Johns Hopkins investigators are among the first in the world to examine ovarian tissue cryopreservation in young cancer patients needing gonadotoxic chemotherapy.

Most children treated for cancer can now expect to be cured. However, in a significant majority, future fertility may be compromised by their disease or its treatment, says reproductive endocrinologist Mindy Christianson.

“While women have the option of freezing embryos or eggs, this is not an option in girls who have not reached puberty,” she says. “In young girls, there have been no viable fertility preservation options prior to ovarian tissue cryopreservation.”

In a pilot study that is a collaborative effort between Johns Hopkins’ Division of Pediatric General Surgery and its Department of Gynecology and Obstetrics, Christianson and pediatric surgeon and principal investigator Jeffrey Lukish are studying the viability of ovarian tissue cryopreservation in six young cancer patients. The idea is to enable long-term storage of significant numbers of primordial follicles. The partnership works well: Lukish has developed surgical techniques to harvest tissue in a safe manner from very young patients, and Christianson and colleagues can use the latest cryopreservation technologies to preserve ovarian tissue for future use when the patient reaches childbearing age.

“We believe that this pilot study will open the field of ovarian cryopreservation in children,” says Lukish. “By providing an evidence base for future practice, the potential benefit to the young girl with cancer is significant.”

They are collecting ovarian tissue at the time patients’ central venous catheters are placed. Part of the sample is cryopreserved for the patient for future use; additional samples are cryopreserved and then transplanted into severe combined immunodeficiency mice to assess the effectiveness of ovarian tissue cryopreservation in this population.

“It’s a very new technology and still considered experimental,” Lukish says. Only 30 babies have been born worldwide from cryopreserved tissue. “We’re hoping in 15 to 20 years, when these girls reach maturity, that technology will have evolved to where we will have better ways to retrieve eggs from the tissue.”

The Johns Hopkins Fertility Center is one of about 100 centers in the world that freeze ovarian tissue under an Institutional Review Board-approved protocol. The fertility center’s lab director, Yulian Zhao, has been pivotal in bringing this technology to Johns Hopkins and plans to add cryopreservation options.

Fertility preservation is a growing concern among patients and their parents, Christianson says. Between 2002 and 2012, the Johns Hopkins Fertility Center counseled 368 females about fertility preservation, a quarter of whom were 18 or younger. Some patients don’t pursue it because of poor prognosis or cost. Participation in the study covers the tissue collection and storage for three years.

The investigators so far have enrolled four girls. Although the study is still in the early stages, Christianson says the frozen tissue has shown good viability, and she hopes to expand the research.

The study is funded by the Robert Garrett Fund for the Surgical Treatment of Children as well as a Fertility Preservation Options Research Fellowship Grant from the American College of Obstetricians and Gynecologists and Ferring Pharmaceuticals.