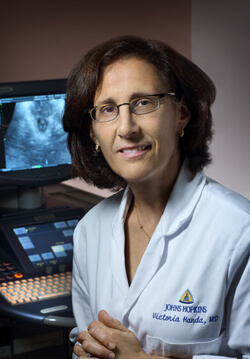 Why do some women develop pelvic floor disorders years after giving birth while others don’t? The answer could lie in muscles deep in the vagina.

In a long-term study, urogynecologist Victoria Handa has been following a group of 1,500 women who gave birth five to 15 years ago to better understand the cause of pelvic floor disorders and come up with better treatments. What’s become apparent is that the pelvic floor’s levator ani muscles play a huge role in injuries sustained during childbirth, Handa says.

Her research so far has found that women with a history of forceps-assisted vaginal delivery are twice as likely to have prolapse compared to women without that history; by contrast, vacuum delivery did not appear to increase the risk of pelvic floor disorders. A possible explanation, she says, is the prevalence of pelvic floor muscle trauma between the delivery types.

More recently, in a smaller study funded by the American Congress of Obstetricans and Gynecologists, Handa and gyn/ob fellow Hafsa Memon looked at birth history among 89 women from their larger study population, comparing women who had undergone at least one forceps delivery to women who had undergone at least one vacuum birth. Using three-dimensional ultrasound to identify obstetrical injury to the pelvic muscles, they found that the odds of levator ani muscle avulsion were increased dramatically in the forceps group. Women with a history of forceps delivery also had other evidence of structural and functional changes in the pelvic muscles. The results, being submitted for publication, suggest that muscle injuries are especially common after forceps birth, says Handa.

Pelvic floor disorders like bladder incontinence and pelvic organ prolapse affect up to one in six women with a history of vaginal birth, and operations to repair these problems are as common as breast cancer, says Handa, “yet people don’t talk about it because it’s personal, and maybe embarrassing.” Approximately 200,000 women undergo surgery to repair these conditions in the U.S. every year.

There are still unanswered questions as to whether to recommend pelvic muscle strengthening exercises like Kegels or more extensive physical therapy for patients to reverse pelvic floor problems or prevent them from worsening, and which patients will have recurring problems. “These are the things ultrasound has a lot of promise to help us understand,” Handa says.