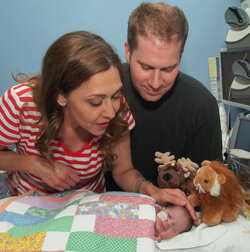 Jaime Herrera Beutler and her husband, Daniel, with Abigail.

Thanks to perinatologist Jessica Bienstock, a Washington state congresswoman is now a happy mother.

Rep. Jaime Herrera Beutler was referred to Johns Hopkins this spring for a third opinion after her fetus was diagnosed with bilateral renal agenesis. To confirm the diagnosis by ultrasound, Bienstock needed to put fluid into the amniotic sac by carefully infusing saline solution into the uterus. She saw what previous physicians had noted: a fetus without kidneys, and a deformed chest and head.

But when Beutler returned a week later, a new ultrasound revealed some fluid had remained. Not only were the fetus’ head and chest developing more normally, the baby was actively moving around.

“We were thrilled,” says Bienstock. “Things were looking better, and the baby was trying to practice breathing.”

Beutler asked for an additional infusion and after discussing the risks with Bienstock, agreed to go ahead. Beutler received five infusions over several weeks before going into labor in July. Her daughter was born 12 weeks premature at an Oregon hospital and has been undergoing dialysis at Stanford’s Lucille Packard Children’s Hospital.

“This case is unprecedented,” says Bienstock. “It would be premature to say bilateral renal agenesis should always be treated using serial amnioinfusion, but this suggests it can be part of the conversation.”

Bienstock, who is planning a formal study of amnioinfusion, has now counseled several other patients referred from around the country.

“Not every patient with absent amniotic fluid is a candidate for amnioinfusion,” she cautions. “It’s only an appropriate treatment for fetuses with no kidneys, or for those with non-functioning kidneys, who don’t have other genetic or serious anomalies. We are not currently looking at this treatment for low fluid of other etiologies.”

Treatments also can be disruptive for patients and their families, who are encouraged to relocate to the Baltimore area for up to two years. Patients undergo ultrasounds and saline infusions once or twice a week, and babies born must undergo regular peritoneal dialysis treatments.