GYN Innovations - Pregnant and Obese: Making the Best of it

Pregnant and Obese: Making the Best of it 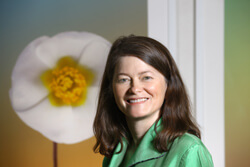 “Our patients are weighing more, and so are their babies. It’s an unsettling trend,” says Janice Henderson, “and one we aim to turn around.”

It throws pregnant women off, at first, when obstetrician Janice Henderson says, You know, you really don’t want to gain any weight at all during this pregnancy.

But some 20 years of caring for obese and morbidly obese women through pregnancy and labor has shown her that even the Institute of Medicine’s recommended lower overall gestational weight gain—11 to 20 pounds for women with a BMI above 30—is still more than need be. “I reassure my patients that they’ll have ultrasound monitoring throughout their 9 months, that normal-size babies are the rule, and that they’ll end pregnancy pounds lighter than when they started, which makes us all happy.”

Henderson’s directive adds to advice that she and colleagues tailor for the population of high-risk obese women who come to Hopkins’ new Nutrition in Pregnancy Clinic. The cutoff for clinic entry is a BMI of 30, but she has patients well into the 50s and 60s. Many come to her with the hypertension, diabetes and cardiac disease that complicate pregnancy, “but even if there are none of those metabolic problems,” she says, “these women and their babies are still at high risk during pregnancy, labor and postpartum.”

“Obesity raises the risk of pretty much any congenital defect beyond 2 percent, the figure for a healthy pregnant patient,” she adds. Odds of neural tube defects, cleft lip or palate, heart abnormalities and hydrocephaly rise significantly—60 percent for some. And for the mothers, hazards read like the inventory at an unwellness superstore: gestational hypertension and diabetes—as well as problems keeping such preexisting conditions stable—and preeclampsia, preterm labor, stillbirth. Obese women in labor are more likely to have cesarian deliveries and during them, increased blood loss, longer operative time and higher risk of a septic wound or uterus.

With this list in mind, against a background of patients carrying Oreo-and-chips-laden handbags, the need for the new clinic became obvious, Henderson says. “Though we’re looking after their diabetes or fetal problems, we’re not addressing our patients’ real problem, the weight gain itself.” So last fall, she and co-attending Erika Werner, with a nutritionist and a social worker, took steps to adjust patients’ lifestyles as well as manage their high-risk pregnancies.

They’ve focused first on younger women at high risk of metabolic disease, to try to reverse the trend. “We talk with them intently about nutrition, water intake and exercise, but we’re not hitting patients over the head,” Henderson explains. Plans are in place for a peer counselor who has faced similar problems and overcome them.

“We’d most like to see women during preconception, when screening has high benefits and better nutrition can help offset birth defects,” Henderson adds.

That may come with targeted outreach. Presently, reaching out involves teaming with area obstetricians, especially those not equipped to handle high-risk pregnancies and births, even vaginal deliveries.

Recently, Henderson delivered a baby whose 400 pound mother had had multiple abdominal surgeries, including gastric bypass. “We’re used to complex cases,” she says, “and we have the backup resources with blood-banking, ICUs and specialty anesthesia in-house, 24/7.”