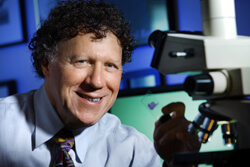 Robert Kurman and his colleagues are trying to prove that most ovarian cancers begin in the fallopian tubes.

With a five-year, $12 million grant from the Department of Defense, scientists from Hopkins and three other institutions have formed a consortium to identify potential sites where ovarian cancer originates. They also hope to confirm a new
theory that most of these cancers develop not in the ovary itself, but in the fallopian tube immediately adjacent to the ovary.

Ovarian cancer is the most lethal cancer of the female reproductive organs, explains principal investigator Robert Kurman, director of Hopkins’ Division of Gynecologic Pathology. By the time most women are diagnosed, he says, the disease has already spread beyond the ovary.

“Despite numerous clinical trials aimed at early detection, the overall mortality from this disease has remained essentially unchanged for decades,” he says. “We want to better characterize where ovarian cancers begin to draw more insight on how to manage the disease.”

For years, women in their early 40s with a family history of ovarian cancer had been encouraged to have their ovaries removed to reduce their risk, Kurman says. Pathologists who evaluated the ovaries and tubes that had been prophylactically removed observed that many women had no cancers or precancerous changes in their ovaries. Rather, they had small, occult cancers in their fallopian tubes. The new thinking is that these small tumors shed malignant cells that implant on the ovaries, he says. True, the prophylactic removal of the fallopian tubes and ovaries in these women at high risk reduces the risk of developing ovarian cancer. But studies have shown that women whose ovaries are removed prior to menopause have a higher overall mortality and are at a higher risk for coronary heart disease compared with women who undergo a natural menopause, presumably because of premature loss of female sex steroid hormones.

If Kurman and colleagues can prove that most ovarian cancers start in the fallopian tubes, women at high risk could have their tubes or the part of their tubes where the precancerous lesions develop surgically removed. That would reduce their risk of developing “ovarian” cancer while preserving their fertility and maintaining their source of disease-preventing hormones.

Studies to begin next spring will focus on high-grade serous carcinoma, the subtype accounting for 75 percent of all ovarian cancers and 90 percent of all ovarian cancer deaths. Four projects will characterize precancerous lesions by clinical, pathologic and molecular genetic analyses. A fifth will evaluate whether these lesions can be modified by oral contraceptives or anti-inflammatory drugs.

“Ovarian cancer is much more complex than we realized,” Kurman says. “We believe that shifting from early detection to prevention of precursor lesions in the fallopian tube will significantly reduce the burden of this disease.”