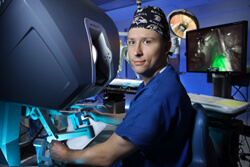 Edward Tanner says the new minimally invasive robotic procedure lowers the risk of harm, provides more accuracy “and gets women back on their feet in record time.”

For most women with uterine or cervical cancer, the prognosis is good, thanks to early detection: The majority of these women are postmenopausal, and the first symptom of uterine cancer is vaginal bleeding—a discovery that usually prompts a call to a gynecologist. Still, cancer cells can’t be trusted, and nothing concerns a gynecologic oncology surgeon more, says Edward Tanner, than having a patient apparently at low risk for recurrence following hysterectomy and lymph node removal who still develops more disease later.

After diagnosis, the standard laparoscopic approach is to remove the uterus and, in many cases, lymph nodes in the pelvis. In the past few years, some surgeons have attempted to identify the lymph nodes at highest risk for disease by injected blue dye and/or radiocolloid into the cervix at the start of the procedure. This technique, called sentinel lymph node (SLN) mapping, is useful but has some drawbacks. The blue dye often stains normal tissue, says Tanner, making it difficult to identify troubling areas with precision.

Fortunately, he says, advanced robotic surgery with multispectral fluorescent imaging—typically favored in other specialties, like urology and colorectal surgery— is now available at The Johns Hopkins Hospital for gyn procedures. With its indocyanine green (ICG) dye, which can only be used with the new camera technology, he explains, suspicious nodes pop up like neon signs, “and that gives us more peace of mind.”

Tanner also cites the advantages of real-time lymphatic mapping and avoidance of radioactivity. With this novel approach, he says, surgeons can direct the pathologist to the lymph node most likely to contain disease that's spread beyond the uterus.

“I’ve seen some patients in which the only positive lymph node was a tiny metastasis in the SLN,” says Tanner. “We can’t know whether this node would have been missed with a more conventional LN analysis, but I’ve also seen cases where patients have had a complete LN dissection that was all negative and the patient then had a recurrence in the area of the LNs. I suspect that we just didn’t find it because we didn’t know which of the 20 to 50 LNs to focus our efforts on.”

The hope, he adds, is that with greater visualization and experience with this technique, “we may one day be able to omit complete lymph node dissection, which can cause lymphedema in the legs.”

Over the course of the 150+ procedures Tanner has performed, he’s rarely needed to convert to an open incision. In a recent patient with cervical cancer, Tanner tackled a radical hysterectomy and lymph node resection, which took about four hours. There were no complications, and the pleased patient went home the next day. “Pain levels are manageable,” he says. “Some women return to their jobs in just two weeks.”

Tanner, who completed his ob/gyn residency at Johns Hopkins and a fellowship at Memorial Sloan Kettering in gynecologic oncology, says his training for the new image-guided robotic procedures was intense. “We had a lot of very sick patients,” he says, “and continually pushed the boundaries of what kinds of surgeries could be performed minimally invasively instead of a large open incision.”

Another important benefit of the new approach, says Tanner, concerns the growing number of obese postmenopausal women with gynecologic cancers. More invasive surgery increases the risk of complications in these patients, especially in those with heart disease and diabetes.

Citing the ease of navigation through four small holes using tiny-wristed interactive robotic arms, Tanner can access harder-to-reach areas, particularly in heavy patients. As with any robotic surgery, there’s no tactile sensation for the surgeon, “but with experience you learn to compensate,” says Tanner. “You can see just how much pressure is on a suture.”