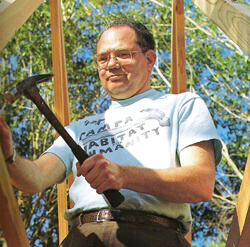 1 2 3
Roger Girson is a strong supporter of the Johns Hopkins Heart and Vascular Institute as well as Habitat for Humanity.

At 10 years old, Roger Girson struggled to breathe and quickly became weak when he exerted himself. “My fingernails and lips would turn blue,” he says. “We lived in a two-story home, and my mother had to carry me up and down the stairs because I couldn’t climb them.”

When none of the various doctors near his hometown in Pennsylvania could address the problem, Girson’s aunt, who lived in Maryland at the time — it was 1949 — recommended he visit The Johns Hopkins Hospital.

There, he was examined by renowned pediatric cardiologist Helen Taussig, who found that his pulmonary valve was not allowing proper blood flow from the heart to the lungs. Despite the seriousness of his diagnosis, Girson could not have been in a better place at a better time. Only five years earlier, Taussig had worked with Johns Hopkins Surgeon-in-Chief Alfred Blalock and surgical technician Vivien Thomas to devise the “blue baby” operation for tetralogy of Fallot.

The congenital defect includes a ventricular septal defect, an enlarged right ventricle, a defective pulmonary valve that prevents full flow of blood to the lungs and blueness caused by a lack of oxygen to the blood.

In 1949, Girson had a pulmonary valvotomy to open his valve, also known as the Brock operation, by surgeon Russell Brock at The Johns Hopkins Hospital.

“Afterward, there was a huge difference,” says Girson. “My parents taught me how to ride a bicycle. I had a normal childhood, and I played outside with friends.”

When Girson got to college, he continued to be active as a broadcasting major. “I would shoot a story, come back to the studio, run up the stairs, take my film and put it on the processor, and then run downstairs.”

Six months later, he landed a job at a TV station, and nine months after that, he was married. He had two children and became a longtime volunteer with Habitat for Humanity.

Years later, at an annual checkup with Johns Hopkins cardiologist Thomas Traill, Girson learned that he needed another open-heart surgery, but this time for an aneurysm. In 2008, Duke Cameron, director of the Division of Cardiac Surgery at The Johns Hopkins Hospital, performed the operation. All went well, and after a successful recovery, Girson went back to supporting not only Habitat for Humanity, but also Johns Hopkins.

For more than two decades, Girson has made annual financial contributions to the Johns Hopkins Heart and Vascular Institute in recognition of the care he has received over the years and the care he continues to receive from Traill. “The work they do is wonderful,” says Girson. “Besides the fact that they saved my life several times, the research Johns Hopkins does has helped a lot of people over the years. I want that to continue.”