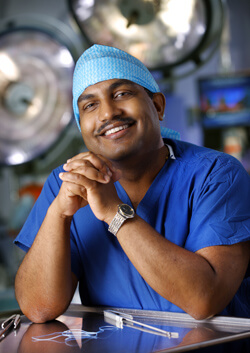 1 2 3
Early repair is vital, says Kaushik Mandal, because valve leakage can go from mild to severe in a short period of time.

In 2000, Jim Watkins’ cardiologist told him not to worry about his heart murmur but to have a follow-up every three years or so. By 2013, tests showed a related rupture in his heart’s mitral valve that would require surgery to repair.

Mandal informed Watkins that the robotic-assisted mitral valve repair is an option for about 80 percent of people but that thorough presurgery tests were essential. “The first priority is having a safe and durable repair, which is why we carefully screen every patient to determine the best approach,” he says.

Besides being in good overall health, the ideal candidate has no lung disease, Mandal explains, because the right lung is collapsed repeatedly for several minutes at a time during the procedure.

In addition, the arteries in the arms, hands, legs and feet must be free of plaque and calcification, because the lung-and-heart bypass machine used during the procedure can destabilize plaque, increasing risk for a stroke or heart attack. This is why, in addition to a stress echocardiogram and a physical, Watkins underwent a CT angiogram to identify calcium deposits.

“Patients with notable calcium deposits on their valve leaflets should have a traditional open-chest operation,” Mandal says. And since echocardiography is notorious for missing calcifications, a cardiac CT scan is essential, he adds.

To further minimize risks during the operation, the Johns Hopkins team monitors oxygen saturation in the legs and brain during the procedure.

Another critical variable is early referral, Mandal says, because “once a patient develops symptoms, the valve may be salvageable, but the outcomes are not as great.”

Robotic surgery can be used to repair leaky or narrowing valves, close a defect between the upper chambers of the heart, remove cardiac tumors or treat an irregular heartbeat that is resistant to treatment by ablation.

“I think of the robot as a million-dollar scissors,” Mandal says. “The decision to use it and whom to use it on is mine. Safety is paramount.”

In the end, Watkins was the ideal candidate for the operation. One week afterward, he was discharged, and within a couple of months, he was able to travel across Europe with his wife.

The Johns Hopkins Hospital has been recognized by The Joint Commission as a Top Performer on Key Quality Measures for: