Hopkins Pulse - When only an MRI will do

When only an MRI will do 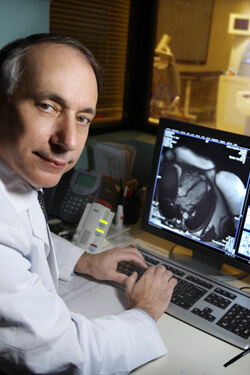 Henry Halperin began testing the impact of MRI on implanted heart devices more than a decade ago.

Having an MRI is often essential for diagnosing and treating a life-threatening condition. But for patients with a device implanted to regulate heart rhythm, an MRI has been for years considered unsafe, and often the procedure has been avoided—even if it was necessary for the health of the patient.

Such was the case with Jane Smith,* a 41-year-old New Jersey attorney. Nearly a decade ago, Smith had a grand mal seizure and temporarily lost her short-term memory. The following year, while pregnant, she had another seizure, was diagnosed with epilepsy and was put on antiseizure medicine.

Yet even with the medication, Smith’s seizures continued. Subsequent CT scans revealed what her doctors thought was a cyst in her brain. A neurosurgeon in New York urged her to have an MRI to know for sure. But five years earlier, she’d had a pacemaker implanted because of a very slow heart rate; because of the device, an MRI was thought to be unsafe.

Smith searched online and found the research of Johns Hopkins electrophysiologist and biomedical engineer Henry Halperin, who began studying the issue of MRI safety with implanted heart devices about 15 years ago. “I contacted him and told him I really needed the test,” Smith says, “and he said I should come to Baltimore.” The MRI, performed without incident, revealed a benign brain tumor, which was surgically removed.

Halperin is not surprised. “We have safely performed MRI exams for more than 700 patients who have implanted defibrillators or pacemakers,” he says. The clinical safety protocol that he and his team developed, which includes knowing which devices can be reprogrammed to a safe mode and carefully monitoring the patient during the scan, is now being adopted by institutions around the world.

A clinical study at Hopkins looked at 438 patients with implanted cardiac devices who had more than 500 MRI scans combined. Only in three patients (1.5 percent) did the energy emitted from the scanner cause the heart device to revert to default settings. “This is a rare occurrence that warrants close expert monitoring during the test, but it is easily remedied after the test is completed,” says cardiologist Saman Nazarian, the study’s lead author and co-investigator. None of the three patients had device dysfunction during long-term follow-up of between 15 and 66 weeks. One patient completed four repeated MRI examinations during the study without any problems.

“With the advancing age of the population and the expanding indications for pacemakers and defibrillators, the capability to perform MRI in device recipients has become an increasingly important issue, and a lifesaving one for some patients,” says Nazarian. For many cardiac device patients who have come to Hopkins, MRI scans have detected tumors and other serious problems missed by other imaging tests, such as a CT or ultrasound exam. Without the MRI, these problems might never have been diagnosed or treated.

“I truly believe that having the MRI saved my life,” Smith says. Since her tumor was removed six years ago, she has not had any more seizures, does not need medication, and went on to have a second child. Twice each year, she comes back to Hopkins for follow-up MRI tests, and all is going well.

*Not her real name.