Hopkins Pulse - To close the door on grief

To close the door on grief 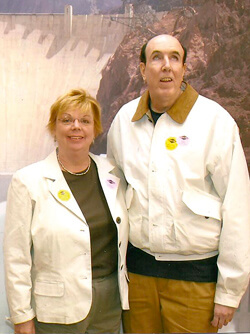 Although his heart had been weakened by Marfan syndrome, Ron Morford and his wife, Faye, enjoyed a trip in 2006 that included a visit to Hoover Dam. Today, Faye has found comfort in supporting research on the condition that claimed her husband’s life.

For nearly 15 years, Faye and Ron Morford thought of The Johns Hopkins Hospital—especially the Heart and Vascular Institute—as their second home. “They always treated us as people and not names on a clipboard,” says Faye. “We looked forward to going there because it was always such a positive experience.”

The Morfords’ frequent visits to Hopkins stemmed from Ron’s cardiovascular issues related to Marfan syndrome, a connective tissue disorder that affects many systems in the body, particularly the heart. Marfan syndrome can cause blood vessels to weaken and the heart’s valves to leak, among other life-threatening conditions.

Although Ron, blind since his late teens, had received care for many years at the National Institutes of Health, he was referred to Hopkins as the need for surgery became apparent. Thomas Traill was Ron’s cardiologist, and Duke Cameron was the surgeon who replaced Ron’s ascending aorta in 1998. A few months later, Ron had a valve replacement operation and then in 2007 another surgery with Cameron and vascular surgeon James Black to replace most of the descending aorta.

Faye struggled with her grief. So accustomed to spending time at Hopkins, she returned one afternoon to say hello to the doctors and nurses she missed seeing on a regular basis. “Dr. Traill was stunned,” Faye says. “He gave me a big hug, and I knew then that I wanted to do something special for him and the Heart and Vascular Institute.”

In 2010, Faye gave $4,000 in honor of Traill and Black, as a thank-you for the excellent care they provided to Ron. In 2011, the year in which Ron would have celebrated his 60th birthday, Faye donated $100,000 to support the Readership in Cardiovascular Medicine, a project initiated by Traill.

The readership raises endowment funds to support the career of a junior cardiology faculty member who is passionate about clinical medicine. Similar to a professorship, a readership is an academic rank that is granted for four years and includes a stipend. Much like start-up funding for researchers, a readership frees the faculty member from financial worries so that he or she can focus on clinical study, teaching and writing related to patient care.

“Once I signed off on the paperwork, it was like closing the door on all my pain,” Faye explains. “My soul has finally settled down, and I’m so full of pride that I’m able to do this. It’s the final chapter in the grief process.”

Faye never imagined being able to make such a significant contribution. “When your heart knows it’s the right thing to do, then you’re comfortable with your decision.” When she found out a patient room would be named in memory of her husband, she was stunned—and thrilled. “Dr. Traill told me it will be an honor to take care of patients in Ron’s room,” Faye says.

Faye also made a gift to the National Marfan Foundation, which in an unexpected twist was awarded to Hopkins researcher Jennifer Pardo Habashi. The Morford Family Grant will fund two years of Habashi’s research to help reduce the risks associated with pregnancy for women with Marfan.