Stenting or endarterectomy? The debate continues 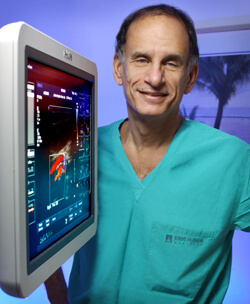 Bruce Perler says evidence shows that most people are better served by endarterectomy.

At 79, Doris Harrison felt unusually tired. She suspected something was wrong, and a doctor’s visit revealed that her carotid artery was more than 90 percent blocked. One year earlier, she’d had an endarterectomy at her local hospital to remove plaque from the same vessel. Now the blockage was back, along with the risk of stroke.

Her two treatment options were a second endarterectomy or the less invasive carotid artery stenting to open the vessel. For guidance, she turned to Bruce Perler, Johns Hopkins’ director of vascular surgery.

Perler had been one of the investigators in the landmark National Institutes of Health (NIH) study that compared the two procedures. Called the Carotid Revascularization Endarterectomy vs. Stenting Trial (CREST), it showed that endarterectomy and stenting are both safe and effective, but it provided no clear-cut answers for choosing between the two.

Age makes a difference, the study showed. Younger people did better with stenting, while those 69 and older had fewer complications with endarterectomy. Older people often have more hardening of the arteries, which may explain their increased stroke risk with stenting, Perler explains.

Younger people tend to have healthier vessels, but some studies show that blood vessels are more likely to narrow again after stenting than after endarterectomy. “So if you have people in their 50s and 60s with a lot of years ahead of them, you may run into the problem of recurrent disease down the line that becomes very difficult to treat once the vessel has been stented,” Perler says.

Another consideration is the risk of silent infarctions, when microscopic bits of plaque go to the brain and may lead to vascular dementia. One study found silent infarctions among 50 percent of people following stenting compared with 15 percent after endarterectomy.

After monitoring Harrison for three months, Perler recommended a repeat endarterectomy. Testing showed that her blockage was worsening, and Perler believed that the most pressing concern was to avoid a stroke. He kept Harrison on cholesterol-lowering statin medication to further reduce the risk. Hopkins vascular surgeons were the first to show, in a 2005 study, that patients who take statins have a much lower rate of stroke, death and heart attack with the surgery.

Harrison’s energy returned after the surgery, and she continues to do well.

Perler concludes that “although CREST was a very well-done study, it hasn’t really settled the issue of which is the optimum treatment across the board.” He believes that endarterectomy is a safer procedure than stenting, because of the lower stroke risk, “especially since the primary goal of opening a blocked carotid artery is to prevent a stroke in the first place.”