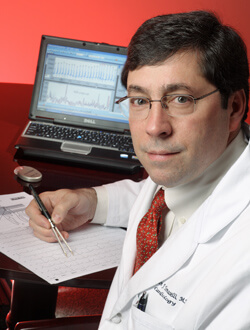 In his national role, Gordon Tomaselli is urging people to be aware of what they can do to help prevent heart attacks and strokes.

Gordon Tomaselli co-director of the Heart and Vascular Institute and director of Johns Hopkins’ Division of Cardiology, has taken on a new title as president of the American Heart Association (AHA).

With his appointment last summer, Tomaselli became the seventh cardiologist from Johns Hopkins to head the AHA, the oldest and largest organization devoted to fighting heart disease and stroke. No stranger to the AHA, Tomaselli also chaired its 2010–2013 Strategic Planning Task Force and earlier was program chair for its Scientific Sessions, a premier international conference for cardiologists.

A cardiac electrophysiologist and widely recognized expert in sudden cardiac death and heart rhythm disturbances, Tomaselli has focused his extensive research on understanding arrhythmias and finding new therapies to ward off the fatal varieties that claim more than a quarter-million lives in the United States each year.

Now, as AHA president, Tomaselli is especially committed to achieving the goals of the Million Hearts initiative, a federal preventive rather than “sick care” program supported by the Affordable Care Act. “Million Hearts” aims to reduce heart attacks and strokes in this country by 1 million over the next five years. Tomaselli is pushing for more research (he’s written more than 170 articles) and advocating for heart health and better lifestyle choices, such as eating right and exercising. Under his watch, the AHA is offering its expertise as well as ability for large-scale reporting and educating to advance the goal.

Tomaselli’s passion for cardiology is driven by family history. He had just completed his medical residency in 1985 when his mother went into cardiac arrest. A few weeks later, she received a heart transplant—an event that Tomaselli says “galvanized my desire to be a cardiologist.”