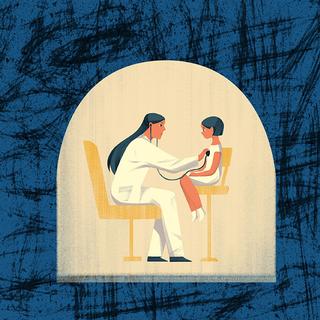 Time isn’t the only thing doctors may be up against when diagnosing a child with pneumonia. Noise, like crying, can make it difficult to hear a baby’s congested lungs through a stethoscope. It can be worse in places where soundproofed exam rooms don’t exist. A team of Johns Hopkins researchers is working to change this by developing a smart, low-cost stethoscope that lets doctors zero in on sounds in the lungs.

With acute lower respiratory infections being a leading cause of childhood death worldwide, the stethoscope could make a big difference in diagnosing pneumonia. “If a child is misdiagnosed, that child goes home and could die,” says pulmonologist William Checkley.

Unlike traditional stethoscopes, which are nonelectric, the smart stethoscope has five low-frequency microphones inside a programmable head that will make it easier to pick up lung sounds, even if it isn’t ideally placed on the body. A sixth microphone facing outward will collect noise from the environment; an algorithm on the stethoscope’s microprocessor will strip that ambient noise from the lung sounds heard by the physician.

“It’s a very tricky balance with removing the noise,” says Mounya Elhilali, the Johns Hopkins electrical and computer engineer who developed the algorithm. “If you end up canceling out a sound that actually speaks to what is wrong with their lungs, then you might actually miss the whole diagnosis.”

The team is also developing software to alert users when the stethoscope detects a lung sound—like the crackly noise of pneumonia—that warrants a visit to a health care facility for further evaluation, as well as an option to hear sounds as they would be heard on a traditional stethoscope.

A prototype is being made by Baltimore-based Harbor Designs and Manufacturing.