Patient Safety: Getting a Handle on Misdiagnoses 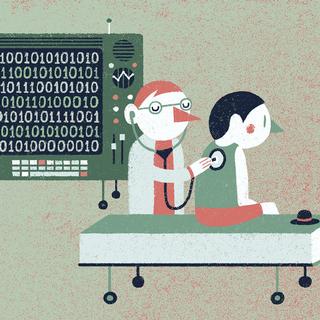 In the airline industry, data monitoring systems in the cockpit provide feedback on a pilot’s performance and safety. In health care, no similar system exists when it comes to physicians’ performance and safety. Doctors rarely know when misdiagnoses happen, despite an estimated 12 million people a year experiencing them in the United States.

With a new method called Symptom-Disease Pair Analysis of Diagnostic Error (SPADE), a team of researchers led by Johns Hopkins’ David Newman-Toker, director of the Armstrong Institute Center for Diagnostic Excellence, is hoping to change that.

Traditionally, trained staff members have found diagnostic errors by conducting chart reviews. But these reviews are labor-intensive, subjective and expensive; they also aren’t very effective because the charts themselves are frequently incomplete.

The SPADE approach uses algorithms to mine clinical and billing data to spot certain symptoms that are often misdiagnosed. Statistical analyses then calculate the rate of diagnostic errors that result in adverse events, such as clinical worsening that requires readmission to the hospital. For example, SPADE can measure how often a patient comes to the hospital with dizziness, is mistakenly told it’s a benign ear condition and sent home—only to return with a major stroke.

“We can also measure how often a patient comes to a clinic with a fever, is told it’s a viral infection, but is later admitted to the hospital with bacterial sepsis,” says Newman-Toker, whose team described the SPADE method recently in BMJ Quality & Safety, with an accompanying proof-of-concept for how it could be operationalized as a data dashboard.

Although the team has focused its initial work on detecting misdiagnosed strokes and sepsis, Newman-Toker says SPADE should eventually work on vascular events, infections and cancer, which together account for 75 percent of all serious, misdiagnosis-related harms.

The team of researchers from Johns Hopkins Medicine and Kaiser Permanente was recently awarded a two-year, $2.3 million grant from the Gordon and Betty Moore Foundation to expand the SPADE approach to other symptoms and diseases. It will also develop new data visualization tools and statistical methods to refine the approach.