For hospital-bound patients—and the clinicians who serve them—the gift of music is proving a spirit-lifting balm. 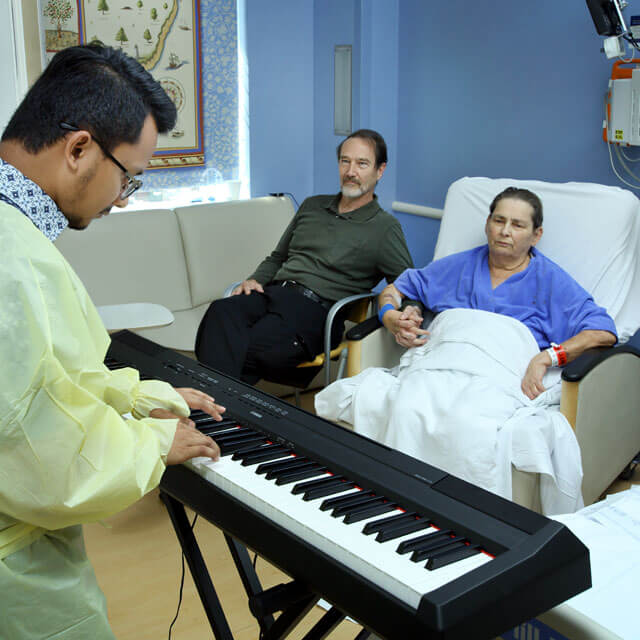 Patient Safety: Getting a Handle on Misdiagnoses

A Johns Hopkins team has developed a new approach that uses algorithms to mine clinical and billing data to spot certain symptoms that are often misdiagnosed.

Results of a large-scale Johns Hopkins study suggest that metformin is safe for most people with diabetes who also have chronic kidney disease.

The gains in insurance coverage with the Patient Protection and Affordable Care Act (ACA) have already translated into improved health for young women with gynecologic cancers, who are getting diagnosed at earlier stages of their disease because of ACA benefits, according to a new Johns Hopkins study.

Curbing inflammation with drugs or lifestyle changes midlife or earlier may be key to delaying or preventing cognitive decline in old age, according to Johns Hopkins authors.

At the Bench: Promise for Parkinson’s

A Johns Hopkins team has developed an experimental drug similar to compounds used to treat diabetes that slows the progression of Parkinson’s disease and its symptoms in mice.

“It is incredible how many men avoid the doctor and ignore early signs of cardiovascular disease but present for the first time with a chief complaint of erectile dysfunction."

"This is a wonderful opportunity to identify otherwise undetected high-risk cases."

“Our findings suggest that clinicians should perform further targeted screening in men with erectile dysfunction, regardless of other cardiac risk factors, and should consider managing any other risk factors—such as high blood pressure or cholesterol—that much more aggressively,” says Blaha. His team reported its results in Circulation.

That’s the number of Facebook followers of PathCast, an online lecture series of pathology cases—both common and uncommon—presented by some of the world’s most prominent pathologists, including a dozen from Johns Hopkins. The free series is the brainchild of Johns Hopkins pathology fellow Rifat Mannan and Emilio Madrigal, a colleague at Emory University.

“We wanted to share knowledge around the world. This allows anyone who has an internet connection to see and hear some of the leaders in our field,” says Mannan, who recently began a faculty position at the University of Pennsylvania while continuing to host the interactive series, which is broadcast live on Facebook and YouTube two or three times a month. Afterward, recorded versions are available on demand on those platforms.