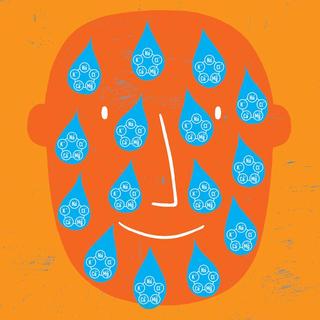 Consider the sad story of sweat: Unless it involves relaxing in a sauna, most of us loathe its feeling—and its smell. Yet sweat provides critical information: People with cystic fibrosis, for instance, have abnormally high chloride levels in their perspiration.

A new wearable sweat sensor developed at Johns Hopkins plays off this fact and aims to monitor cystic fibrosis and its medications, making it easier for physicians to provide personalized treatment programs.

Currently to monitor the disorder, patients visit clinical labs for a sweat test, a method also invented at Johns Hopkins. The test involves collecting and analyzing perspiration by applying a sweat-stimulating chemical, pilocarpine. “There have been various upgrades to the technique, but it’s basically remained the same for 57 years,” says pediatrician and medical geneticist Garry Cutting, an adviser to the device design team.

The sensor will provide data to researchers on what until now has remained somewhat of a mystery: how patients are faring in between their sweat tests. “We don’t know how patients respond to a drug dose. All kinds of things remain unanswered because we don’t have a way to continually measure and get numbers.”

The tiny prototype relies on a sensor capable of assessing the concentration of chloride ions in a person’s sweat by measuring the potential difference between two small electrodes. The team is perfecting the sensor to ensure it provides accurate chloride readings done by patients.

Sewn into a garment, the sensor could assess other conditions too: The monitor could provide soldiers and athletes with information on their electrolyte balance, indicating what they need to drink to operate at peak performance.