Through clinical studies and advocacy, Michael Blaha is improving the odds for those most at risk for cardiovascular disease.

Patients who need urgent surgery for ruptured aneurysms, brain traumas, brain tumors or other neurological injuries often have a portion of their skull removed that must later be replaced, necessitating a second operation.

Medications designed to stop brain damage that leads to memory loss in patients with Alzheimer’s disease have thus far failed in clinical trials—possibly, many researchers say, because they are given to those who already have symptoms and too much damage.

Staying Off the Fat Track

Recent work from psychiatry researcher Kellie Tamashiro has given new meaning to the old saw “You are what you eat.” She’s also found evidence to support an important corollary: You don’t have to be what your mother ate.

A team of researchers has devised a Pac-Man-style power pellet that gets normally mild-mannered cells to gobble up their undesirable neighbors. The development may point the way to therapies that enlist patients’ own cells to better fend off infection and even cancer, the researchers say.

A new approach to colorectal surgery care, which has been shown to decrease hospital length of stay by 50 to 60 percent, has gotten the green light at Johns Hopkins, where a team began implementing it earlier this year.

Millions of Americans have chronic, undiagnosed and untreated sleep disorders. However, with the current nationwide shortage of sleep medicine specialists, few will get the care they need, even if they’re already seeing other doctors. It’s a problem that neurologists and board-certified sleep physicians Charlene Gamaldo and Rachel Salas have long pondered.

Hospitals across the country vary substantially in their use of minimally invasive surgery, even when evidence shows that for most patients it is superior to open surgery, according to a new study by Johns Hopkins researchers. The finding, which drew on data from 1,051 hospitals, represents a major disparity in the surgical care delivered at various hospitals, the study’s authors say, and identifies an area of medicine ripe for improvement.

—Jeremy Nathans, professor of molecular biology and genetics, neuroscience, and ophthalmology, explaining his team’s successful effort to plot the labyrinthine paths of some of the largest nerve cells in the mammalian brain: cholinergic neurons, the first cells to degenerate in people with Alzheimer’s disease.

“Each of these cells is like a city connected to its suburbs by a single, one-lane road, with all of the emergency services located only in the city,” says Nathans. “You can imagine how hard it would be in a crisis if all of the emergency vehicles had to get to the suburbs along that one road. We think something like this might be happening when cholinergic neurons are trying to repair the damage done by Alzheimer’s disease.”

A summary of the research was published online in the journal eLife on May 7. 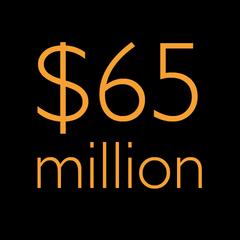 The amount given to the Johns Hopkins Kimmel Cancer Center to construct a building for outpatient oncology treatment, which will serve as the primary entry point for cancer care on the East Baltimore campus when it opens in 2017. Named in memory of a Maryland mutual fund investment leader and philanthropist treated at Johns Hopkins for pancreatic cancer, the Skip Viragh Outpatient Cancer Building will accommodate all medical oncology patient consultations and clinics. Imaging services will also be available.