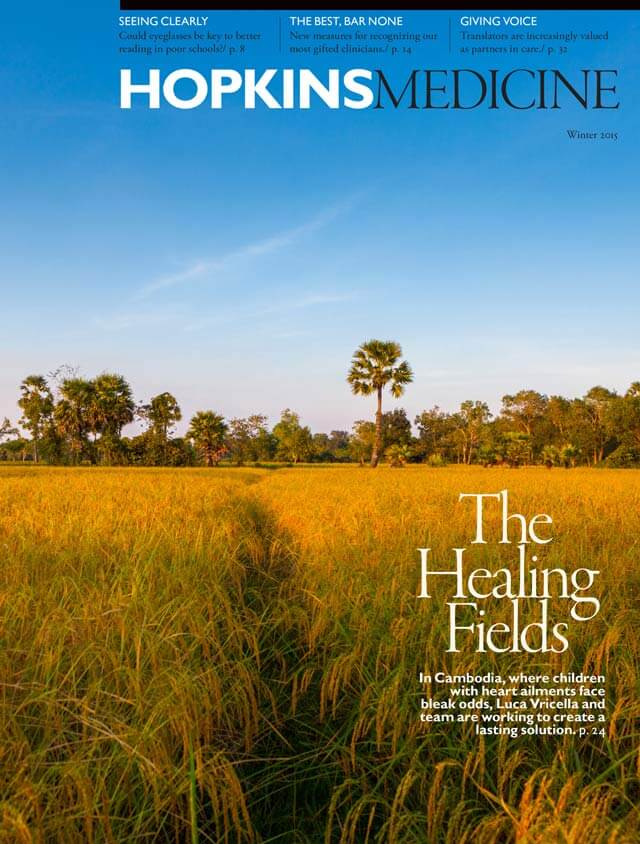 When Caitlyn Jenner made her debut as a woman on the cover of Vanity Fair earlier this month, she gained the attention of the world. The former gold medal Olympian, who won the decathlon in 1976 as Bruce Jenner, noted in an accompanying tweet on Twitter: “I’m so happy after such a long struggle to be living my true self.”

The struggle for acceptance that Jenner has played out so publicly is one that millions of people in the gay, lesbian, bisexual and transgender (LGBT) community face more privately on a daily basis. And it’s a struggle that has kept many from accessing the medical care they need, as you’ll discover in this issue’s cover story, “Embracing the Rainbow.”

The reasons are myriad, but the bottom line for the health care community is unambiguous: “Every person needs to be treated with dignity and respect,” as Johns Hopkins nurse educator Paula Neira points out in our Web extra video (www.hopkinsmedicinemagazine.org). A former Naval officer and lawyer, Neira is a transgender woman who is among those leading the charge here to fix the “cultural competency gap” that exists among health care providers.

As is the case at most academic medical centers today, LGBT cultural competency is an area in which Johns Hopkins has room to grow. “Real people still face real difficulties in going to seek care. That’s something that we can change,” says Neira.

Happily, that hard work has begun.

With regard to “The Healing Fields” [Winter], it should be noted that there is a high mortality rate among the healthy people living in the floating villages on the river near Siem Reap. Our travel guide told us that 30 percent of the people die before getting to the hospital because the transportation takes too long. They are dying from treatable conditions, such as dehydration, infection, bleeding, trauma and obstetrical complications. They must go by boat to the road to Siem Reap and then by truck. A helicopter system is badly needed. Perhaps a military helicopter could be made available and a couple of strategic helicopter pads built. I believe the Swiss hospital has a helicopter pad on the roof. A trained village health worker should be in contact with someone at the hospital regarding the transports.

The editors of Hopkins Medicine have been generous in publishing the letters of physicians lamenting the reduction in work hours of house staff and their seemingly unanimous opinion that it is detrimental to producing excellent physicians.

Most recently, such a letter was written by renowned cardiologist Dr. Richard Conti, entitled “Sad Days Ahead” [Winter]. I went to medical school at the University of Florida (Class of 1983) and had the ambition of being an internist. I went so far as to have a seamstress sew additional pockets on the inside of my lab coat so that I could carry the Washington Manual of Medical Therapeutics. After two visiting subinternships as a medical student, each lasting one month, at Grady Memorial Hospital and at Jackson Memorial Hospital, I realized and admit unashamedly that I did not have the physical stamina to tolerate the sleep deprivation needed to be an internist. I therefore chose a career in pathology.

I had the good fortune in my training and career to sit across the microscope from many of Hopkins’ greatest pathologists. To name a few: Drs. John Yardley, Risa Mann, Jonathan Epstein, Robert Kurman and Sharon Weiss. I believe that to be a great doctor, regardless of one’s specialty, requires three things: You must witness greatness, you must recognize it, and you must aspire to it. I will never accept the idea that a grueling training program where the suffering of the doctors-in-training rivals the suffering of their patients is optimal.

I read “The Best Bar None” [Winter] with significant interest. In 1983 during medical school, I was fortunate enough to have been exposed to Philip Tumulty. As an excellent clinician, outstanding diagnostician and a physician with an unsurpassed bedside manner, he became truly a wonderful role model to me as I embarked upon a career in general internal medicine. During my residency, I was lucky enough to be trained by another Hopkins-educated general internist, Jeremiah Barondess, who was an equally all-around stellar clinician.

Currently, my primary role is in patient care, medical education and departmental administration. Many colleagues in various specialties function predominantly as clinicians and educators rather than focused researchers. Although we have a clinical educator track here at Stony Brook, there is significantly more data available to evaluate the educator component (teaching evaluations, lectures given, courses directed, new teaching methods developed) rather than the clinical aspects. Utilizing the Hopkins system to identify clinical excellence could prove to be highly beneficial as we more formally evaluate the clinical side of care. Thank you for bringing this important initiative to the attention of Hopkins alumni.