Brevity is the name of the game in today’s world of “two-minute reads” and 280-character tweets, a world in which biomedical breakthroughs are trumpeted in a barrage of sound bites—“Scientists find cure for X,” or “Long-held treatment for Y proven ineffective—giving us little opportunity to mull, ponder and stew.

With Hopkins Medicine, we’re grateful to run counter to this trend. We remain committed to in-depth treatment of important stories—and to providing historical context whenever possible. After all, today’s headline-grabbing game changers almost always are built on the work of earlier innovations. We think it’s important not to lose sight of that.

This through-line is perhaps easiest to discern in our yearlong “Shoulders of Giants” series, in which we trace contemporary breakthroughs back to seminal contributions made by Johns Hopkins “greats” in the school’s early years. But you’ll also find this context building in other feature stories. In “Homing In on Diversity,” for example, writer Mat Edelson carefully reports that recent progress in minority faculty hiring had important precedent in work done by some administrators and faculty members of color dating back several decades. And our “Mighty Mouse” lab science story on the gene-editing tool CRISPR features a stunning medical illustration by Jennifer Fairman. In it, she shows how CRISPR improves upon embryonic stem transfer, the technique widely used until just a few years ago.

Taking the long view requires an investment in time and thought—on our end, and yours as well. We think it’s an investment worth making and hope you do, too.

Giving Billings His Due 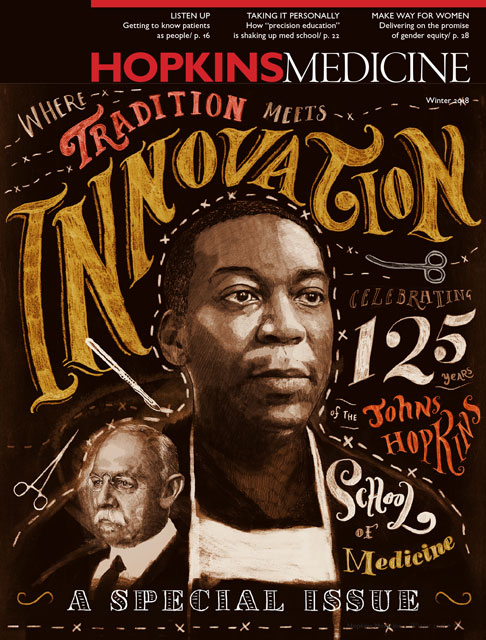 A brief note to compliment you and your staff on the winter issue of Hopkins Medicine.

There was an excellent variety of articles, all very readable. I enjoyed the historical short articles on Osler and Billings (“He Set the Course in Medical Education”). I think Billings sometimes gets overlooked in the Hopkins pantheon, even though the signature building on the East Baltimore campus is named for him. I’m glad that Dr. Hruban noted the development of the national library of medicine started by Billings.

When I read my winter issue of Hopkins Medicine on “innovation,” it occurred to me that last year was the 50th anniversary of the introduction of [my] Burton fiber-optic headlight now used universally by surgeons, rather than the screw-in light bulb used by Cushing and still in use at Hopkins in 1960, when I started my neurosurgical residency.

Not only did the lightbulb produce poor illumination, it also made sure that if the surgical assistant dared to look down into the operative field, the effort would be rewarded by a second-degree forehead burn (by which one could always identify neurosurgical residents).

A few days after completing my Hopkins residency, I was transformed into being a Navy neurosurgeon and chief of a 40-bed neurosurgical unit during the Vietnam War. Fortunately, I had the opportunity to take advantage of newer technology to spare the foreheads of my surgical assistants. [The first prototype of a practical Burton fiber-optic headlight emerged in 1967; in 1972, a unit featuring a welder’s headpiece and a universal swivel joint was awarded a U.S. patent.]

I am a 1958 graduate of the school of medicine and was an Osler intern the following year. I was indirectly involved in the racial integration of the Osler Medical Service during my internship.

At that time, the medical floor had four 29-bed wards, one each for “colored” (the term in use at the time) men, white men, colored women and white women. I was an intern on the white women’s ward and one evening received a call from the assistant resident, who was the admitting officer. He asked if I had a bed available for a new patient, and I did. He said that the colored women’s ward was filled, and he had a sick patient who had to be admitted and was sending her up to the white women’s ward.  Subsequently, several women of color were admitted to my ward.

Thus, the Osler Medical Service was integrated, not due to an administrative directive or a government regulation or a public protest. Integration occurred because one physician put into practice one of the basic tenets of being a doctor. He did what was best for the patient.

I do not remember who the admitting resident was and hope that some of my fellow house officers from that time will.  That person should receive the credit that is due him.

Patients at the Center

I am writing to congratulate you and your contributors on the outstanding reporting in Hopkins Medicine. There always seems to be at least several feature articles in each issue that capture my interest.

I was a faculty member at The Johns Hopkins Hospital back in the 1970s and established a model program for pregnant adolescents at that time. It was with considerable interest that I came across the article by David Glenn on “Listen Up” [Winter], which appears to be a more modern version of our efforts.