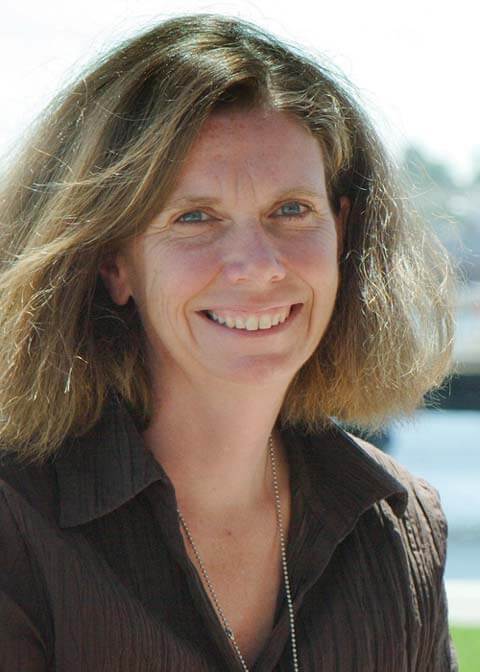 Rejuvenation isn’t solely the domain of our plastic surgeons here at Johns Hopkins—at least when it comes to Hopkins Medicine magazine.

With this issue we debut a fresh new design that’s been many months in the making, under the able leadership of art director Max Boam. Throughout our departments you’ll find a much wider variety of shorter, punchier stories and appealing imagery—all aimed at expanding the breadth of our coverage of Johns Hopkins Medicine’s ever-growing enterprise. Be on the lookout, too, for plentiful links to videos, online interviews, and other web “extras,” all easily accessed through our new interactive digital edition at www.hopkinsmedicinemagazine.org. 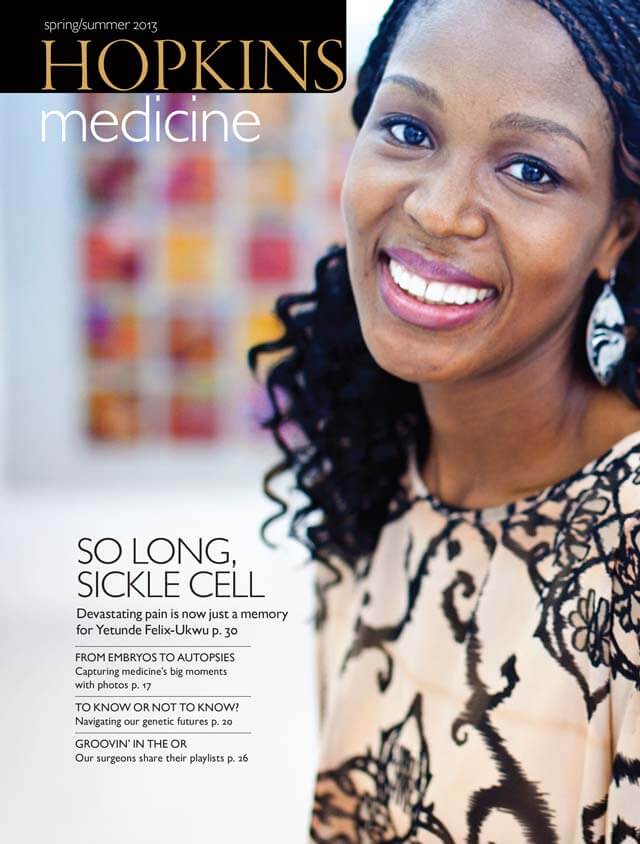 One thing that hasn’t changed with our “facelift” is our commitment to substantive, compelling storytelling, as you’ll discover in this issue’s features about delirium in the ICU, advances in melanoma treatment, and better tumor tracking in brain cancer.

Our excellence in this area was celebrated most recently with a notable honor from the Association of American Medical Colleges. “A Cure for Sickle Cell” (Spring/Summer 2013) by Jim Duffy earned the AAMC’s 2014 Robert G. Fenley Writing Award, widely considered the top prize in academic medicine journalism. Hats off to Jim—and rest assured that we’ll continue to bring you award-winning writing in the months to come. 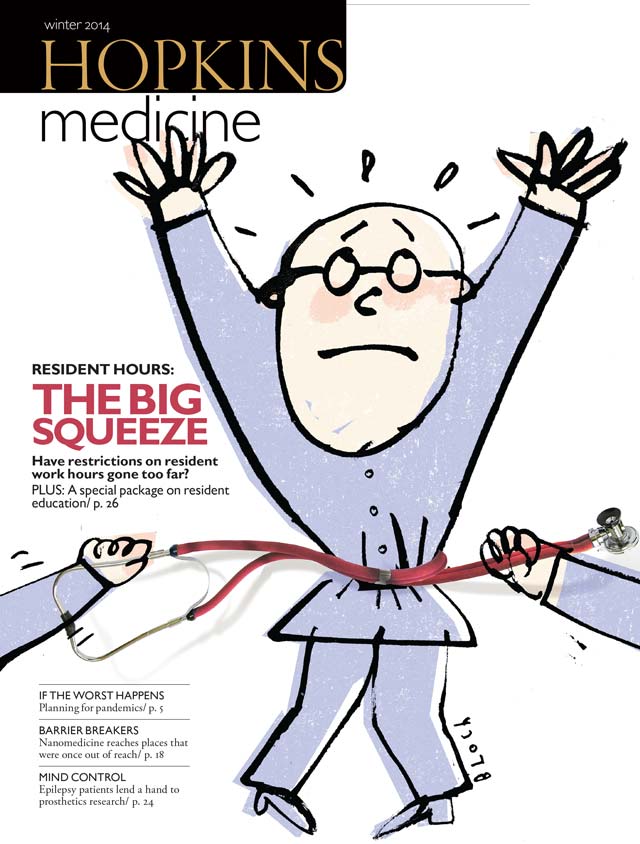 I read with some bemusement the article in Hopkins Medicine (Winter 2014) titled “Put to the Test.” Evidently residents are being asked to think about the reason for ordering a test before doing so and a formal course has been put into place to encourage this. My immediate reaction was: “Huh?”

It forced me to acknowledge my age (JHU Med ’64; Osler ’65) because I thought that is what everyone did as a matter of course. If one does not need the test or will not act on the result anyway, why would one order it?

During my 20 years of academic medical teaching, I used an intellectual exercise with students and house officers: After the history and physical were recited, I would stop the proceedings and ask which would be the appropriate lab tests to order. They could be anything from an MRI to a platelet count, but the limit was four tests. (Screening panels were counted by the number of individual tests contained therein.) We almost never went beyond three tests.

What a breath of fresh air to read in the Winter 2014 issue Dean Rothman’s Post-Op [column], “A Prime Priority.” I am delighted to read that he sees a need for my alma mater to educate and train students for primary care careers.

I entered Hopkins in 1955 intending a career in general practice in a small community. In 1958–59, when applying for an internship, I was told by faculty and the assistant dean for students that I was “wasting my Hopkins education” by doing that. I was applying for a rotating internship, but the dean would not write my letter of recommendation until I visited and considered other possibilities. I persisted, went to Western Reserve University Hospital’s rotating internship, and on to a two-year GP residency at the University of Colorado.

I practiced in Sitka, Alaska, and was recruited in 1970 to the University of Washington. I served as founding chair of family medicine, associate dean for academic affairs, and as acting dean twice, for a total of two years. I then returned to practice on Lopez Island, Washington, until retirement. I was the sixth president of the Society of Teachers of Family Medicine in 1978–79.

I do not believe I wasted my Hopkins education. Thank you, Dean Rothman, for acknowledging that a first-rate research institution and “incubator for the nation’s preeminent subspecialists and biomedical researchers” can lead in primary care.

I read with considerable interest Dr. Paul Rothman’s discussion on primary care [Post-Op, Winter]. My own experiences may speak to some of the points he made.

In my graduating class of 1976, only two of us opted for residency in family medicine, a rather new specialty at that time. Neither of us was able to get a residency through the matching program, and had to scramble for last minute positions. (I found out later that many of the FP residencies felt that graduates from Hopkins and other top schools just did not understand primary care and weren’t inclined to accept them.) With the help of the dean of student affairs making numerous phone calls, I was able to finally get a position in a program in Monmouth, New Jersey. Within a year that program folded, but fortunately I was able to obtain a place at the Mountain Area Health Education Center in Asheville, North Carolina, a wonderful and fulfilling residency program in a beautiful location that thrives to this day.

Upon completion of my residency in 1979, I took a job with two well-established physicians in the small New Hampshire town of Antrim. We worked out of a small clinic there, providing cradle-to-grave care.

After three years working with this group, I established my own solo practice in offices on the hospital grounds, supplementing income by also covering the emergency room and moonlighting in a local alcohol and drug rehabilitation center in nearby Dublin. It was during that period that reality struck: I realized that a gastroenterologist colleague made more money in a 30- to 45-minute colonoscopy than I did seeing 18 to 20 patients a day.

After one year of solo practice I accepted a position in the United States Navy. As a junior officer my income went up almost twofold, and I started getting some time off.

I spent another 20 years in the Navy, both in family practice and as a flight surgeon (including a tour in Iraq). After retiring from the Navy, I spent another 7½ years as a primary care provider in outpatient clinics in the Veterans Administration. Primary care providers in that environment were the lowest paid. I don’t think that any of us really ever felt we were “highly valued by academic leaders” as Dr. Rothman, in his article, felt should be the approach.

I am proud of the fact that I am a graduate of Johns Hopkins. I take pride in the fact that Hopkins is among the best of the academic and specialty hospitals, and a leader in research. I also have no regrets for having gone into family practice.

It is gratifying to learn of efforts to apply real academic discipline to the study of house staff scheduling (“The Big Squeeze,” Winter 2014). Even so, some non-quantitative inputs can identify aspects deserving careful attention.

Those who were medical students during the heroic days of the full-time house staff viewed them with awe and respect. Nights on duty were, however, seldom lonely: Junior and senior assistant residents, and often the chief resident and a gaggle of students, pitched in as work demanded.

Some of those students later entered practices in hospitals lacking house staff, where nurses are tasked with assessing and treating patients following orders phoned in by doctors overly careful of protecting their personal time. In this environment of lowered expectations, those who as students and residents had been inspired—maybe programmed—to full-time engagement have found themselves unwilling to offload onto nurses the tasks that under different circumstances would have been assigned to house staff. During long lonely nights, they do their own histories and physicals. They speak in real time with the patients, parents, and other family, assessing their resources, needs, and capacities.

The question raised by experiences like these is how to structure training programs so they encourage lifelong commitment to accepting even uncomfortable chores and inconvenient hours.

In the winter issue of the magazine, in our Alpha Docs brief about professor of surgery Bruce Perler (p. 9), we neglected to note that he is the Julius H. Jacobson II, M.D., Professor. The magazine apologizes for the oversight.