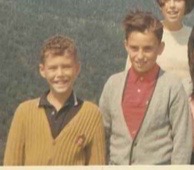 Michael, left, and Bill as kids

Longtime readers may remember a cover story we ran nearly two decades ago with the arresting headline: “To Hell and Back with My Cousin Michael.”

Michael Billig, a college professor then in his early 40s, was given 50/50 odds of beating his leukemia through a pioneering bone marrow transplant here at Johns Hopkins. His cousin Bill Glovin was there to capture the intense highs and lows of Michael’s medical odyssey, which was ultimately successful.

About nine months ago, Bill—now an editor for the Dana Foundation—reached out to pitch a second article. After nearly 20 years, Michael’s blood cancer had returned, this time taking a more virulent form. Once again, he would need a bone marrow transplant here. Michael was game to have his experience documented again, and Bill could make the time to write about it. Would the magazine want the story? Seeing this as the gift that it was, I gratefully replied “yes.” 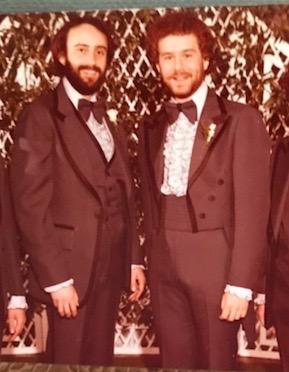 Michael, left, and Bill in their 20’s

Much has changed in bone marrow transplant since Michael’s first experience, as you’ll discover in “Back to the Brink,” largely thanks to advances pioneered here. But you’ll find there are constants as well, notably the roller coaster ride of the months-long treatment protocol, which takes its toll—both physically and emotionally—on patient and family.

Michael will tell you it was all worth it—again. Shortly before we went to press (spoiler alert!), he sent this text to his cousin: “I just got the results from Friday’s bone marrow biopsy. The upshot: ‘no phenotypically abnormal population (of cells) identified.’ None. Nada. Zilch. A fairytale ending!” 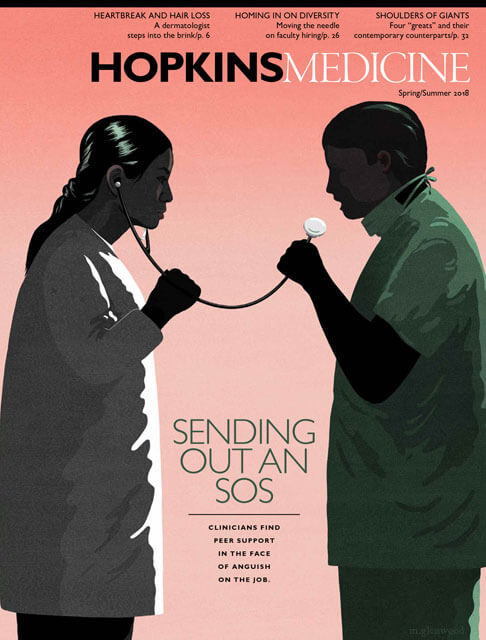 I was surprised to read in my Spring/Summer issue of Hopkins Medicine that the Department of Medicine is retiring the age-old tradition of having its first-year residents wear a short white coat [In Focus]. Reportedly, the action came in response to the residents’ growing discontent: They viewed the coat as “pejorative” and worried that it “potentially reduced patient confidence in the care they were providing.”

As a full-time medical educator for almost six decades, I have to agree with Sanjay Desai, the residency program director, who wrote, “All institutions have to adapt to stay relevant and to ensure their traditions continue to uphold their core values.” And I would have done exactly what he did—remove a perceived impediment to learning, whether real or imaginary.

Retiring a long-standing tradition is never easy. It typically raises controversy and often leaves some degree of sadness and regret. But now that the short white coat is out of their way, the discontented residents should be able to focus more intently on the opportunity at hand—a preeminent Hopkins education.

The Importance of Diversity

I applaud “Homing in on Diversity” [Spring/Summer] in its clear presentation of the very important issue of increasing the participation of underrepresented minority (URM) faculty members at the JHU School of Medicine.

As a newly minted assistant professor of psychiatry just graduated from the Phipps program in 1971, I was afforded the opportunity to found what was then called the JHU Community Psychiatry Program under the auspices of the Department of Psychiatry. The goal was to provide psychiatric care to the residents of the East Baltimore Catchment Area, for which Hopkins had been assigned responsibility by the Maryland Department of Health and Mental Hygiene.

The majority of clinicians participating in that program at that time were African-Americans. Later in my career, as vice chair of a department of psychiatry at a major U.S. medical school (1983–87), I was honored to participate in a program aimed at increasing the acceptance of URM medical students to the school. From these experiences, the importance of these endeavors was abundantly clear to me, as was the need to initiate these efforts at the earliest possible point in the careers of potential recruits.

I would be interested in what activities have been initiated in this regard by this program. I would also be interested in learning the decision-making that went into the omission of the name of perhaps the most celebrated URM former faculty member of the JHU School of Medicine, Dr. Benjamin Carson.

Editor: There are indeed a number of URM former faculty members, such as Ben Carson, whose efforts were important and noteworthy. We regret that we weren’t able to include everyone.