In Vitro Fertilization Comes to America: Memoir of a Medical Breakthrough

In 2013, gynecologist Howard W. Jones Jr. ’35—then merely 102 years old—published Personhood Revisited: Reproductive Technology, Bioethics, Religion and the Law. It was a brief but comprehensive account of these issues and how he and his late wife, endocrinologist Georgeanna Seegar Jones ’36, addressed them as they pioneered in vitro fertilization in the United States and oversaw the 1981 birth of this country’s first “test tube” baby.

Now 104 but still active as ever, Jones has published a new book that provides more personal details about how he and his wife undertook the quest to achieve human in vitro fertilization (IVF), and became embroiled in the often-emotional political and religious controversies ignited by their work.

Retiring from Johns Hopkins in 1978, the Joneses moved to the brand-new Eastern Virginia Medical School in Norfolk, Virginia, where they unexpectedly received a huge donation to create the Jones Institute for Reproductive Medicine. Assembling a small but dynamic team of researchers—all of whom had Johns Hopkins experience—the Joneses eventually succeeded in enabling a Massachusetts couple to have a child, Elizabeth Carr. (Now Elizabeth Carr Comeau, and herself a mother, she wrote the foreword to this new book).

The Joneses did not achieve this breakthrough without encountering a buzz saw of fierce opposition. One local newspaper editorial accused them of pressuring IVF parents to have abortions if tests showed that their child might be developmentally disabled—a “totally false” charge, Jones writes. The institute’s members filed a $27.5 million libel suit. The out-of-court settlement provided enough money to support their research for several years.

Writes Jones drolly: “I have often said that if one is looking for research funds, it is easier to win a suit for libel than to write a grant application to the National Institutes of Health.” 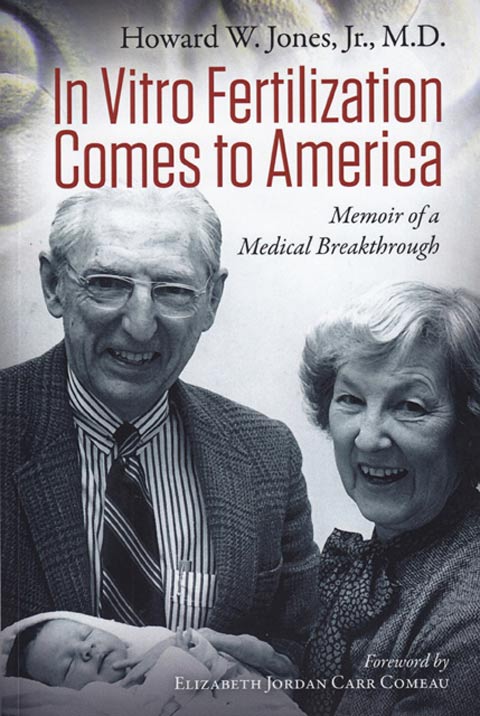 In Vitro Fertilization Comes to America: Memoir of a Medical Breakthrough