One need not go back to Hippocrates to recount when a governing principle of medicine was that the doctor knew best.

Until the mid-20th century, the operative doctrine for many physicians was to “[conceal] most things from the patient … revealing nothing of the patient’s future or present condition,” as Hippocrates put it, and the American Medical Association’s Code of Ethics once advocated “beneficent deception for gloom prognostications.” Indeed, when Elizabeth Kübler-Ross was researching her classic 1969 book, On Death and Dying, the greatest barrier to her efforts to speak with terminally ill hospital patients was the refusal of hospitals to admit that they even had any dying patients.

Today, the dynamic has shifted dramatically from physician “parentalism” to “patient autonomy,” writes Robert C. Macauley (HS, pediatrics, 1995–98) in his remarkably readable yet comprehensive book, Ethics in Palliative Care: A Complete Guide. Ethical issues inevitably arise when patients and/or their families disagree with physicians on the course that medical care should take—and those conundrums comprise an important aspect of Macauley’s exceptional book.

Despite its daunting heft, Macauley’s 548-page, 19-chapter book is certain to become a landmark text on the complicated, challenging and inextricably entwined fields of palliative care and biomedical ethics.

In some respects, the first 12-word sentence in the book says it all: “No specialty faces more complex and diverse ethical dilemmas than palliative care medicine.”

Macauley is well-equipped to undertake this emotionally charged subject. Trained as a pediatrician, medical ethicist and palliative medicine specialist, he is also an Episcopal priest. Ironically, Macauley—now a professor of pediatric palliative care at Oregon Health & Science University in Portland—remembers that when he was training at Johns Hopkins, he never heard the words “palliative care.” As a resident, he knew Nancy Hutton (HS; fellow, pediatrics, 1982–84), now a professor of pediatrics and medical director of Harriet Lane Compassionate Care, the Children’s Center’s “wonderful palliative care program,” in Macauley’s words.

He was chatting with Hutton at a medical meeting a few years ago and told her about the silence on “palliative care” he recalled from the 1990s. “Her response was, ‘Well, that’s probably because no one was talking about it back then,’” he says.

Times change—and the challenge of just how to implement palliative care is of crucial medical concern. Today, 90 million Americans are living with serious illness, Macauley writes, and some 6 million of them could benefit from palliative care.

The sections of Macauley’s book include two chapters on the ethics associated with care planning; five chapters on death and dying issues; four chapters on pediatric ethics and palliative care (issues covered only superficially in most other books); and six chapters on “other topics,” covering such issues as requests for nonbeneficial treatment, death and organ donation, the clinical practice of palliative care, and the roles of culture and spirituality in palliative care. Each section includes case histories that illustrate the often “gut-wrenching” nature of decisions that must be made.

Macauley envisioned an audience for his book that encompassed the general public as well as medical “professionals already in the field who seek deeper grounding” in the ethical challenges endemic in palliative care. To make the book accessible to the lay audience, Macauley set out to write something devoid of what he calls “medicalese” and “philosophical jargon.” He has succeeded admirably.
Â 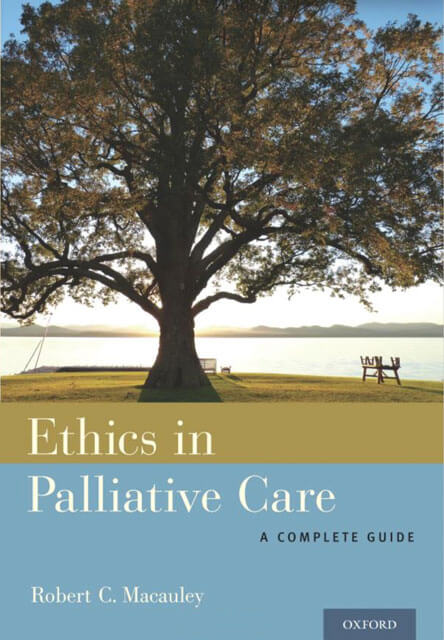