The 36-Hour Day: A Family Guide to Caring for People Who Have Alzheimer Disease, Other Dementias, and Memory Loss (Sixth Edition)

Some 40 years ago, 10 publishers rejected a book manuscript from Nancy Mace and that described how family members could care for patients with Alzheimer’s disease and other dementia. The subject was too “depressing” and “uncomfortable,” they said.

Fortunately, editors at Johns Hopkins University Press were not so obtuse. Aware that cases of Alzheimer’s and dementia were being diagnosed more frequently in the late 1970s, they recognized gold when Mace, a psychologist and educator in the Johns Hopkins Department of Psychiatry and Behavioral Sciences, and Rabins, a neuropsychiatrist on the Johns Hopkins faculty since 1978, presented them with their manuscript based on an oft-mimeographed handbook they had written.

Today, with more than 3 million copies of The 36-Hour Day having been sold worldwide since its 1981 publication, the JHU Press’ judgment and the exemplary work of Mace and Rabins have been amply justified.

Given the rapidly developing research breakthroughs into Alzheimer’s, the significant increase in the number of such cases diagnosed and the accelerated aging of the population since the fifth edition of The 36-Hour Day was published in 2011, it clearly is time for an update.

This sixth edition contains new information on such subjects as devices that make life simpler and safer for dementia patients, palliative and hospice care, choosing a residential care facility, and support groups for caregivers, friends and family members.
Â 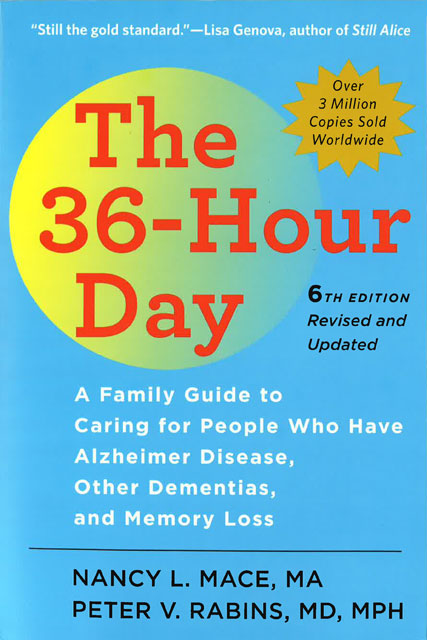 How do you know if you or someone you love has Alzheimer’s Disease?
Peter Rabins, head of the Peter Rabins Alzheimer’s Family Support Center at Johns Hopkins, answers this question and more. Watch his video series.