Still Down: What to Do When Antidepressants Fail

That formulary’s length is not surprising. As veteran Johns Hopkins psychiatrist Dean MacKinnon notes, major depressive disorder is one of the most common and debilitating conditions, annually causing some 1 million people worldwide to commit suicide. In a concise, clearly written and exceptionally helpful book, he provides insights and advice on what to do if those medications don’t work initially.

The brain is a complex organ, and what transpires within it often is mysterious. Every one of the drugs classified as an antidepressant helps in about 60 to 70 percent of cases, MacKinnon writes. They do so by increasing the amount of the neurotransmitters serotonin and/or norepinephrine, and possibly dopamine, in the space between neurons in the brain. Yet it isn’t known why this change in neurotransmitters effectively treats major depressions.

MacKinnon instead has spent the past two decades trying to determine why some patients do not respond well to antidepressant medications and how to address that treatment failure.

Creating nine patient composites based on many cases he has handled, he uses their stories to describe why an antidepressant treatment “for some unknown biological reason” sometimes “goes awry.” He also tells how he has sought to understand the wide variety of causes for such failure and what to do for those who do not respond to antidepressant treatment. 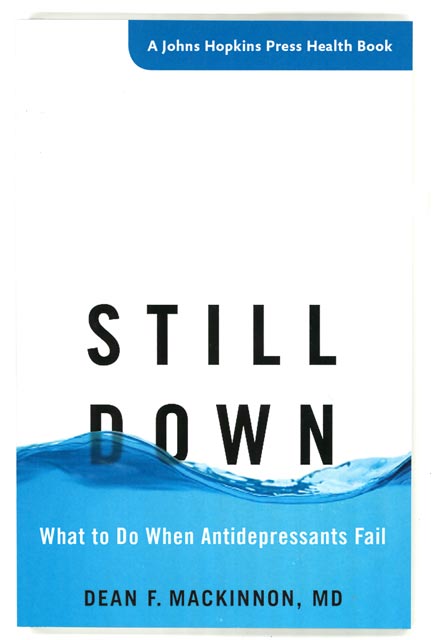 Still Down: What to Do When Antidepressants Fail