Rx for an Ailing World

Consider the recent spate of viruses that has spawned fears of possible epidemics sweeping our country—dengue, Ebola virus disease, Zika—all prompting frantic efforts to rapidly develop a vaccine to combat these threats to global health.

Then consider this: We indeed have the technology to create vaccines and quickly deploy phalanxes of syringe-wielding health care workers to the impoverished nations where such viruses arise, stemming the diseases’ spread with thousands of injections. But what if didn’t have to develop the vaccines? What if we instead had focused earlier on the conditions—poor sanitation, inadequate or nonexistent local health systems—that enable these viruses to emerge and begin to spread in the first place?

“Yellow fever, dengue, Zika—they all breed in the same mosquito in the same environments,” says Randall Packard, director of the Department of the History of Medicine. “We battled yellow fever at the beginning of the 20th century, and now we’re battling Zika. If we’d done what we needed to do in terms of these environments, maybe we wouldn’t be battling these other diseases.”

In his exhaustively researched, elegantly written History of Global Health: Interventions into the Lives of Other Peoples, Packard urges a refocusing of the worldwide drive to improve health. He certainly doesn’t advocate abandoning the immensely effective preventive measures currently used, such as immunizations, vitamin A dietary supplements and insecticide-treated bed nets. These save the lives of tens of thousands of people, including many youngsters.

“But these young children grow up and have other health problems that cannot be controlled by these things,” he says. “And if they go to seek treatment, basic health care, they have to go 30 to 40 miles to get to a clinic. We’ve got to change that situation. We need to take some of our energy and resources and begin thinking about how we can develop basic health services.”

Packard’s book cites many reasons why such an approach hasn’t been adopted more forcefully. Among the most common is that “it is much easier to sell programs that you can show have an immediate impact, where you can count how many people have been vaccinated, how many capsules of vitamin A have been given out,” he says. Indeed, renewed funding often depends on these statistics. It is far more difficult to immediately measure the impact of building health clinics and training health workers.

Nevertheless, says Packard, “we need to expand our vision” so that we focus on basic health needs in underdeveloped areas, where health care workers are poorly paid, basic supplies (disposable gloves, syringes, etc.) are lacking, and little has been done to address the underlying social and economic determinants of poor health.

By placing global health initiatives from the late 19th century to the present in broad-based perspective—covering the medical, social, practical and political forces behind their development—Packard’s 16-chapter book provides those currently seeking to improve global health, and those studying to enter the field, much to ponder about its future. 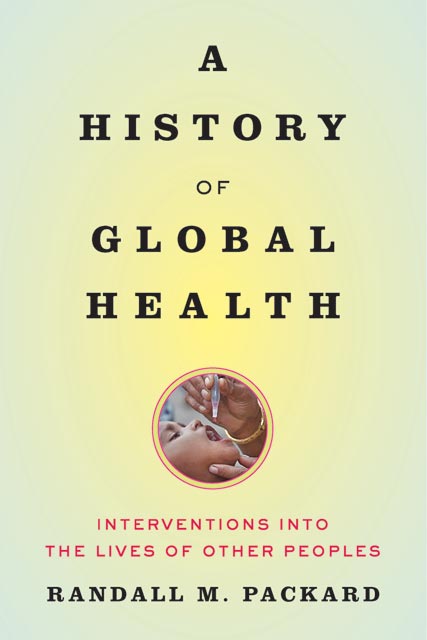 A History of Global Health: Interventions into the Lives of Other Peoples