If Only Walls Could Talk: The Johns Hopkins Children’s Center

If you still have your dog-eared copy of the Harriet Lane Handbook, as do tens of thousands of physicians worldwide, you’ll find something familiar—and a great deal more about Johns Hopkins pediatrics—in If Only Walls Could Talk, a comprehensive anthology of essays on the history of the Children’s Medical and Surgical Center (CMSC) at The Johns Hopkins Hospital.

Compiled and edited by George Dover, who retired as director of the Department of Pediatrics on June 30 after a distinguished 20-year tenure, and Jerry Winkelstein, former director of the department’s Division of Allergy and Immunology, the book’s 33 chapters are printed in the exact same typeface (Perpetua) used in the Lane and, like the sections in that legendary, invaluable guide, none of the chapters has a byline. The 44 faculty, staff and others associated with Johns Hopkins pediatrics who wrote them are listed prior to the book’s title page, but a sense of seamless collaboration is maintained by leaving each chapter unattributed.

Originating as papers for a 2011 symposium, the chapters were contributed by a roster that includes not only Dover and Winkelstein but numerous Johns Hopkins pediatricians and nurses whose acclaimed achievements created the rich history of the CMSC from its opening in 1964 until its closure in 2012. That is when the Department of Pediatrics moved to The Charlotte R. Bloomberg Children’s Center, the 12-story clinical tower.

Just like the Lane, this book covers every aspect of pediatric care, from allergies to urology, but gives the historical background for each and provides profiles of those whose work made Johns Hopkins the exemplar—often the birthplace—of many of these specialties.

Copies are available from the Children’s Center Office of Development, hopkinschildrens@jhmi.edu or 410-361-6493, for a minimum donation of $50 per book. A portion of the proceeds will benefit the Harriet Lane Pediatric Residency Program. 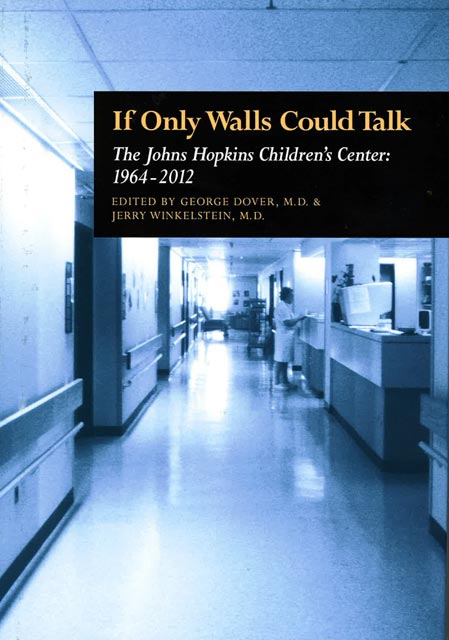