Our 125th anniversary festivities are a celebration of the collective.

By Paul Rothman, Dean and CEO 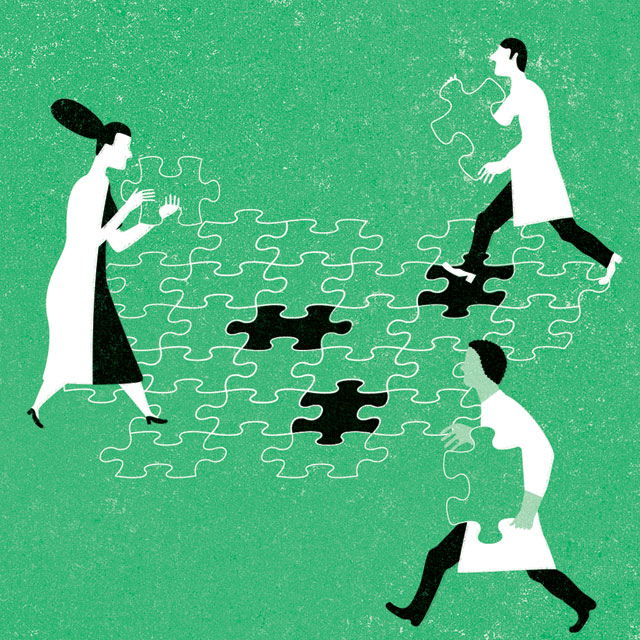 Let’s begin this column with a trivia question. Which New York Yankees player was MVP of the 1998 World Series?

Think back to their elite pitching staff that year: Mariano Rivera, David Wells, David Cone, Andy Pettitte. Maybe a slugger like Paul O’Neill, Tino Martinez or Bernie Williams? An all-around performer like Jorge Posada or Derek Jeter? Even a late-career all-star—Darryl Strawberry or Tim Raines—would be a fine guess.

In fact, it was third baseman Scott Brosius, who hit .471 in the series with two clutch homers. In the clubhouse, holding his trophy, Brosius was humble: “I don’t know what to do with this thing. It’s bigger and heavier than anything I’ve ever gotten.” He added, “I just feel privileged to be part of this team.”

You may be wondering what this story has to do with the 125th anniversary of the Johns Hopkins University School of Medicine. As a lifelong Mets fan, I rarely succumb to Yankees nostalgia, but something happened recently that led me to reflect on that ’98 roster. The National Academy of Medicine elected 70 new members last cycle. Of those inductees, a remarkable 10 percent came from the Johns Hopkins Medicine community.

This was a huge career milestone for these seven individuals: Mark Anderson, Tina Cheng, Rachel Green, Felicia Hill-Briggs, Marty Pomper, Bob Siliciano and Suzanne Topalian. Moreover, sharing the spotlight with their Johns Hopkins colleagues made the moment that much more special. The fact of the matter is, when you play for a team that is stacked with talent, be it the ’98 Yankees or the Johns Hopkins University School of Medicine, what you might give up in individual recognition you more than recoup in collective pride.

Which raised a question as we planned a series of exhibits and displays to mark 125 years of innovation at Johns Hopkins: How would we choose which figures and accomplishments to highlight? Never mind the past—the school of medicine currently has more than 3,000 faculty members, most of whom have produced important scholarship. Inevitably, we would leave someone out. After all, there is a reason Leading the Way, Neil Grauer’s exhaustive history of Johns Hopkins Medicine, weighs more than the kettlebells at the Cooley Center.

This question weighed on us as we sat down to design a pop-up museum on view at the Welch Library. Certainly, we wanted to celebrate some watershed moments in Johns Hopkins history—William Halsted’s introduction of antiseptic procedures in surgery, John Jacob Abel’s isolation of insulin, Helen Taussig’s blue baby procedure. But as we got deeper into the project, it became clear there was no way to capture every seminal event. That freed us up to tell some lesser-known tales, as well as the stories behind the stories.

For instance, the exhibit introduces us to an early school of medicine student named Jay McLean. In April 1918, he wrote to his family that he and his classmates were eager to finish their medical degrees so they could go work in a field hospital on the Western Front. Six months later, as a deadly epidemic broke out in Baltimore, McLean found himself on the front lines of a different type of war. At The Johns Hopkins Hospital, Spanish flu patients occupied six full wards, and the hospital had to stop accepting new patients. As physicians fell ill, students stepped up and took over their mentors’ clinical duties—a story McLean tells in his own words through a series of letters now on display as part of this fabulous retrospective.

What makes Johns Hopkins great is not a handful of standouts but a deep roster of bright, dedicated individuals spanning 125 years. Call it team spirit—our anniversary festivities are a celebration of the Johns Hopkins Medicine collective and a chance to revel in the small part each of us plays in carrying on that proud tradition.