A New Path to Promotion 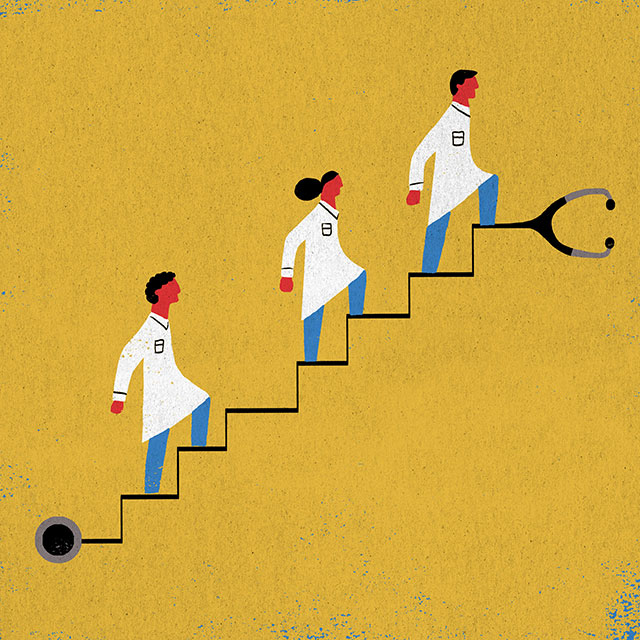 In 2008, David Hellmann and Scott Wright founded the Miller Coulson Academy of Clinical Excellence. David, who is vice dean of Johns Hopkins Bayview Medical Center, and Scott, who is director of the academy, had a vision: They wanted to celebrate and foster clinicians at Johns Hopkins who excelled at patient care. As part of that effort, they thought it was important to assess clinical excellence and created a framework for doing so. They believed that exemplary clinicians deserve the same level of recognition and acclaim that top-notch researchers received. Since I’ve been here, I’ve strongly supported this mission. In 2014, we expanded the academy from Johns Hopkins Bayview to all of Johns Hopkins Medicine.

Over the past decade, the academy has thrived, and it now has more than 80 members. This burgeoning clinical community is a hotbed of clinical creativity, a place where new ideas for patient care can percolate organically out of random hallway conversations.

Of course, meeting patients’ needs is an integral part of what all of us do every day at Johns Hopkins. Our faculty and staff members work hard to provide compassionate, world-class care to our patients and their families. We are very proud of this work.

The creation of the Miller Coulson Academy began to address, but also highlighted, a long-standing institutional issue. In recent years, many faculty members who focused on taking care of patients had felt frustrated. They did not see a clear career path in our traditional faculty structure. Some argued that our criteria for promoting faculty members focused too much on research and teaching, and not enough on clinical care.

Several years ago, we formed a task force to identify ways we could recognize and reward clinical excellence. As an extension of that, in summer 2018, we formed a faculty task force to develop a Clinical Excellence Promotion Track. After a great deal of discussion and work by many stakeholders, the task force came up with a proposal. It recognizes faculty members who focus primarily on patient care (both delivering it and teaching about it) through academic promotion. In May, the proposal was approved by the Advisory Board of the Medical Faculty. We are now working out the details and expect to implement the clinical faculty track within the next year.

We think this new track will help us reward our best clinicians and provide them with a more gratifying career path. It will make our institution a much better place to work, ensuring that all of our faculty members can receive appropriate recognition for excellence. For more than a century, we have provided the highest quality of care for our patients. Now we have a more systematic way to recognize this incredible work.

In a way, this new clinical track brings us back to our origins. One of our founders, William Osler, the “father of modern medicine,” strongly believed that focusing on the patient was the core of medicine. He argued that by paying attention to the patient, clinicians could provide the best care, better understand the causes of disease and develop more effective treatments. More than a century before the term “patient-centered care” even existed, Osler was a fervent advocate for it.

With our flourishing Miller Coulson Academy and our new clinical track, we are continuing along the path Osler marked out more than a century ago.