Advances in surgical precision, safety and outcomes require that we bury complexity in the OR. Enter a new kind of engineer. 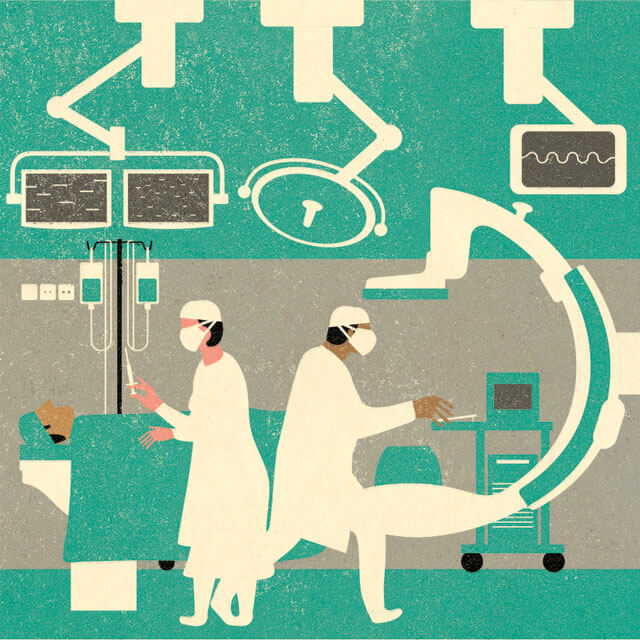 Advances in high-precision surgery have been enabled by 3-D imaging, navigation and robotics. In neurosurgery, for example, such innovations are now standard of care, with emerging approaches such as magnetic resonance-guided focused ultrasound and laser interstitial thermal therapy. Similarly, in spine surgery, intraoperative 3-D imaging and navigation are increasingly common, and several robotic assistants have emerged in the last year.

The pace of technology integration—or more often, conglomeration—in the OR is expanding, with researchers looking to orthopaedic, urologic, gynecologic, thoracic, cardiac and otolaryngologic surgery as new frontiers that would benefit from advanced imaging, computer vision and robotics. Moreover, the decade ahead signals a major intersection of data science and surgery, in which information is continuously curated and analyzed to identify factors underlying poor outcomes and help guide optimal treatment.

Advances in surgical technology have been and will be integral to success, but the complexity of intervention increases in proportion to the density of technologies conglomerating about the treatment process. At some point, the complexity is unsustainable: The proportionality exceeds human capacity, workflow is broken, information is discarded and shortcuts—or errors—are made. The complexity conundrum is not unique to medical intervention. Cellphones, cars, airplanes and a surprising array of systems with which we interact every day operate upon complex underpinnings. But the complexity has been buried.

In the decade ahead, the partnership of surgery and engineering will be tasked with a challenge greater than that of geometric precision: to bury the complexity of technologies in the OR, streamline systems to the point of invisibility, broaden their applicability in the mainstream, and enable the continuous capture, curation and learning from each intervention to the benefit of the next.

Such partnership will require a new kind of engineer: a surgineer. Beyond expertise in math, computing, physics and physiology, which are foundational to biomedical engineering, the surgineer will require a systems view of the interventional process. Beyond contributing another gadget to the arsenal, the surgineer will innovate in ways that bury complexity in the OR and enable technological advances without paralyzing workflow. Beyond measurements and monitoring, the surgineer will help to transform the OR into an environment of continuous quality assurance, data capture, learning, prediction and adaptation.

Such expertise within the circle of care is not without precedent. Physicists have been integral to the practice of radiology and radiation oncology for a century—not only in the development of new systems but also in daily clinical care—and they have helped to position these fields well in burgeoning areas of data science and precision medicine. A surgineer holds similar promise for routine delivery of advanced surgical techniques and building a foundation for surgical data science.

The surgineers are coming—and some are among us already. This fall semester, we launched a new course, called Surgery for Engineers, which is open to master’s students in the Whiting School of Engineering and doctoral students in the school of medicine. In the first week of class, engineers learned the basics of suturing, cautery and wound closure. They learned to scrub in. They learned to tell a Kelly from a mosquito. They were introduced to the anesthesia cart, practiced biopsies and used endoscopes. They studied techniques ranging from mainstream to cutting edge, and they will soon suit up and head to the clinic.

In 2019, the strongest students will be matched with clinical collaborators for a semesterlong course—Surgineering—in which they will embed in the circle of care at The Johns Hopkins Hospital. Under clinical mentorship, they will bring perspectives of systems engineering and data science to the clinical theater. Their goal is not to add to the surgical arsenal. Rather, it is to help transform the arsenal into a system of seamless integration: to bury complexity, facilitate mainstream adoption of advanced techniques and help position surgery for the era of data science in medicine.

Jeff Siewerdsen is John C. Malone Professor of Biomedical Engineering and co-director of the Carnegie Center for Surgical Innovation at The Johns Hopkins Hospital.