By Paul Rothman, Dean and CEO 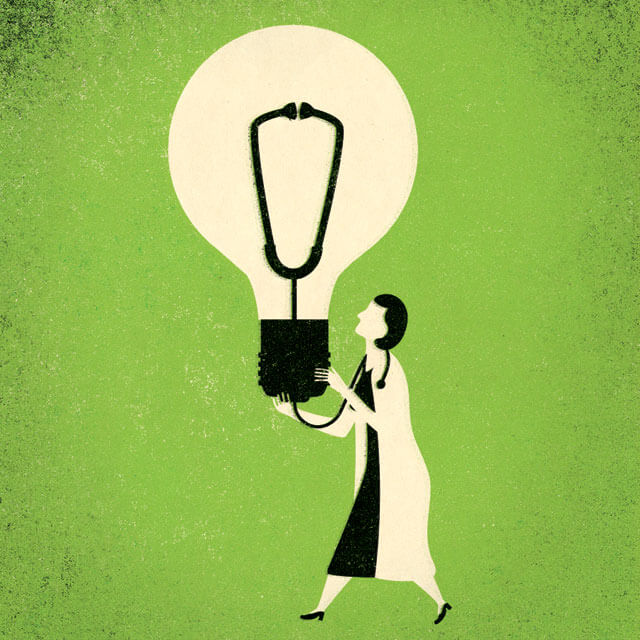 As we mark the 125th anniversary of the Johns Hopkins University School of Medicine, we have been recounting some of the stories that have played out in the shadow of the dome over the years. In the winter issue, we told the tale of Victor McKusick—best known as the founder of modern genetics but also a self-appointed Johns Hopkins tour guide in his day. In the spring edition, we paid homage to a medical student who had to rise above his station when the deadly Spanish flu struck Baltimore in 1918, sickening community members and physicians alike.

In the third and final column of the anniversary year, I want to spend some time talking about the women of Johns Hopkins Medicine. With multiple events throughout this year, we have celebrated the remarkable Johns Hopkins women who helped blaze the trail in medicine, transforming it from an all-male profession to one that, today, is more than one-third female, with more women than men entering medical school.

We kicked off the anniversary festivities in January by honoring the original woman of the Johns Hopkins University School of Medicine, Mary Elizabeth Garrett, as we dedicated our school of medicine boardroom in her honor. It’s a point of pride for many of us that the John Hopkins University School of Medicine has admitted women since the day it opened, and we have Ms. Garrett to thank for that. She mandated that condition when she donated the money to establish the school.

There were three women in the school’s first incoming class, but only one made it through to graduation day. A photo in our 125th Anniversary Pop-Up Museum shows Mary Packard, the first female graduate. If you read accounts of those early years, you’ll find it was a harsh environment for women students. They were mocked and excluded by male classmates, and some professors resented their presence.

An 1897 New York Times bulletin perfectly captures the double standard: “Commencement exercises at Johns Hopkins University today were rendered doubly interesting … because one of the recipients is a young woman. She bore her honors blushingly but proudly, and received the congratulations of all present with becoming modesty.” This “blushing” physician went on to become a public health crusader and establish the first open-air school for tubercular children in the United States.

Since then, more than 2,000 women have graduated from the Johns Hopkins University School of Medicine and gone on to successful careers in science and medicine, making monumental contributions to human health. Florence Sabin became the first woman ever nominated to the National Academy of Sciences for her work on blood vessels and the pathology of tuberculosis. Helen Taussig helped correct a serious heart defect in infants with the “blue baby” procedure. Georgeanna Seegar Jones pioneered treatment for infertility. More recently, alumna Redonda Miller became the first woman president of The Johns Hopkins Hospital.

We have come a long way.

In June, we held a ceremony to mark the 250th woman to achieve the rank of full professor in the school of medicine. Our female professors are an elite and accomplished group—people like Carol Greider, the tenth woman to win a Nobel Prize in medicine, who are unlocking the mysteries of human biology and making their mark on their fields. Just as importantly, they are providing mentorship for the next generation of physicians and scientists, and particularly young women.

These relationships are important because while the field has made progress toward gender equality, disparities persist today. Take, for example, this troubling statistic: Thirty percent of top female clinician-researchers say they have experienced blatant sexual harassment on the job, according to a recent survey of women who received career development awards from the National Institutes of Health. This is unacceptable.

As we start the next chapter of our Johns Hopkins Medicine story, we must continue to advance women’s careers and cultivate women leaders. We also need to keep honoring the women who confronted resistance and pushed ahead, clearing the path for others in the process. Their legacy is all around us.