Back from the Dead

The recent synthesis of the horsepox virus raises troubling questions for biosecurity. 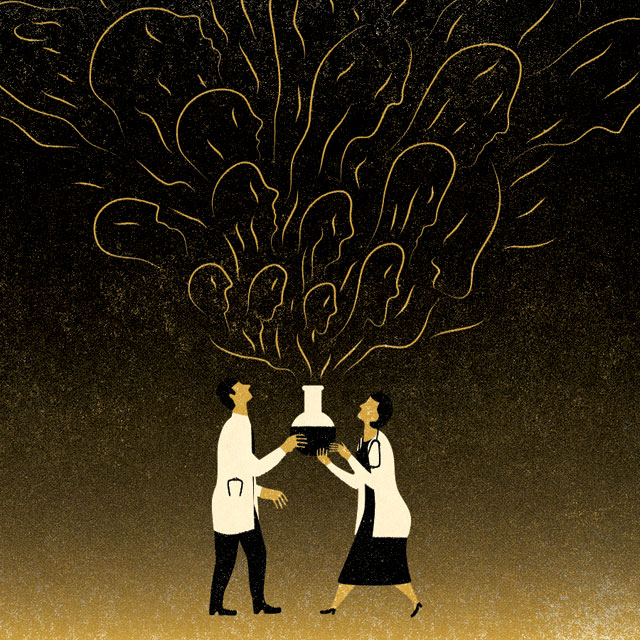 When smallpox was officially eradicated in 1980, thanks in large part to the efforts led by former Johns Hopkins School of Public Health Dean D.A. Henderson, the world saw an end to a scourge that had killed 300 million to 500 million people in the 20th century alone.

There have been no transmissions or cases since, with smallpox only reported to exist in two national repositories. A recent development, though, could make it easier for scientists to re-create the smallpox virus from scratch. As Science reported in July, a team of scientists in Canada has synthesized horsepox using genetic pieces ordered in the mail—and publication of that work is imminent. Horsepox does not infect people, but the concern is that the technique used to create it could also be used to synthesize smallpox.

Researchers have cited several objectives for the work, including the intention to develop it as a smallpox vaccine, develop it as a virus-based cancer treatment and show that synthesizing smallpox de novo is possible.

But I believe the work raises a number of serious questions and concerns, partly about the specifics of the work, and partly about what this says about biosecurity and biosafety.

The first question is whether experimental work should be performed for the primary purpose of demonstrating that something potentially dangerous and destructive can be made using biology. In this case, horsepox was created in the lab, at least in part to show that synthesis de novo of smallpox virus is feasible. Going forward, we need to ask: Should research with high biosafety or biosecurity risks be pursued with a justification of demonstrating that something dangerous is now possible? I don’t think it should. Creating new risks to show that these risks are real is the wrong path. At the very least, it’s a serious issue needing serious scientific and policy discussion.

A second question that is more relevant to this experiment is how much new detail will be provided in the forthcoming publication regarding how to construct an orthopox virus (the genus that includes smallpox, horsepox, monkeypox and cowpox). It is one thing to create the virus; it’s another thing altogether to publish prescriptive information that would substantially lower the bar for creating smallpox by others.

A third question relates to the approval process for experimental research, with implications for international biosecurity or international biosafety. The scientists who did this work are reported to have gone through all appropriate national regulatory authorities, though they have conceded that these authorities “may not have fully appreciated the significance of, or potential need for, regulation or approval of” this work. So while research like this has potential international implications to health, the work is reviewed by national regulatory authorities without international norms or guidelines that direct them. This means that work considered very high risk, and therefore rejected by one country, could potentially be approved by others.

In January 2017, the White House published new guidelines, the “P3CO policy,” aimed at providing guidance for “potential pandemic pathogen care and oversight.” While I think that P3CO could be a good step forward, whether and how that policy will be implemented remains to be seen, since it offers guidance for federal agencies but does not require their action. Moreover, as it is drafted, the policy would not have had bearing on the horsepox research, had it been proposed in the U.S. Beyond that, there is no international component to P3CO.

There clearly needs to be an international element to these policies. We need agreed-upon norms that will help guide countries and their scientists regarding work that falls into this category. We also should be having high-level policy and scientific dialogue regarding the necessary role of scientific review, guidance and regulation for work that falls into special categories of highest concern.

Tom Inglesby is the director of the Johns Hopkins Center for Health Security. This piece is adapted from a blog post that first appeared on the center’s blog, found at http://www.bifurcatedneedle.com.