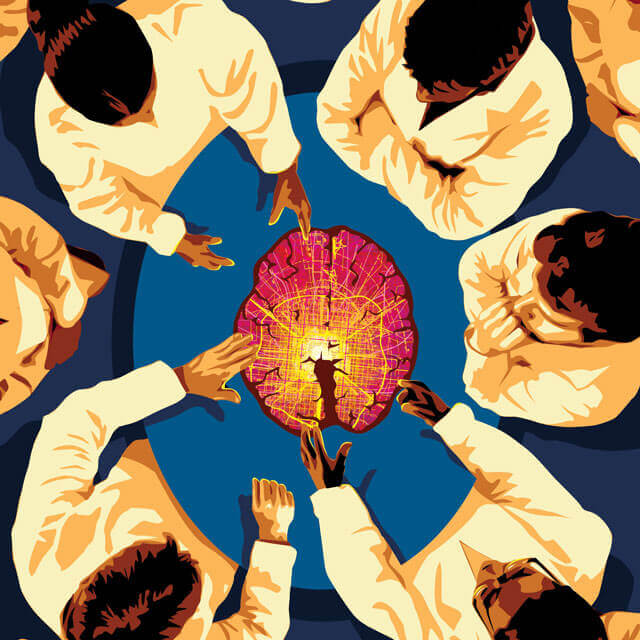 When the elevator doors open to the third floor of the Rangos Building, a world of possibility—hope, some might say—emerges. A few steps in, a floor-to-ceiling molecular image of brain neurons meets the eye. Picture windows offer sweeping views of Johns Hopkins’ Science + Technology Park. Across the 48,000-square-foot space, researchers come into view. Some open freezers or centrifuges. Others peer into microscopes or analyze data on computers. But commanding the most attention are the slices of human brains they’re studying.

Welcome to the Lieber Institute for Brain Development.

Here, more than 3,000 human brains have been donated to help unlock mysteries about one of science’s most vexing frontiers: psychiatric disorders. The institute, a Johns Hopkins affiliate launched in 2010, houses the largest postmortem human brain repository in the world dedicated to the study of neuropsychiatric conditions, says Chief Medical Officer and neuropathologist Thomas Hyde. These include major depressive disorders, schizophrenia, autism and Alzheimer’s disease.

So far, the institute has partnered with four medical examiners’ offices nationwide to accelerate the rate of collection (500 brains donated per year) and to diversify future studies. Methodically sliced and packaged in zipper-locked bags, the brains fill nearly a dozen freezers set to minus 80 degrees Celsius.

The work is bittersweet, as most of the brains belonged to people whose lives ended unexpectedly. Many are casualties of the opioid epidemic. At any time, Hyde and Lieber Institute CEO Daniel Weinberger could receive a call from the morgue. They meet with next of kin to discuss the possibility of donating a loved one’s brain. Should a family agree, Hyde or a colleague arranges for the brain extraction and transport to the institute. They also document the family’s psychiatric history.

And so begins the analysis of a person’s brain, often disordered enough to have caused a traumatic death. But rather than attributing mental illness and suicide to “a defect in character,” says Hyde, “we know that there are biological, chemical and molecular factors involved that we can tease out.”

Hyde’s team applies a meticulous method to every case. They probe each brain’s neuropathology and produce a thorough clinical description. Then they use lab techniques to isolate RNA, DNA and proteins from selected regions of the brain, before tapping into genetic technologies to better understand underlying neural mechanisms.

Over in a dissection area, neuropathologist Rahul Bharadwaj tests regions of a brain slice as part of a large study to assess risk for mood disorders. Calling the brain “a big city,” he points to the almond-shaped amygdala—the seat of emotions—where neurons can go awry and affect behavior: “That’s the downtown.” Pointing south, he says: “Here are the suburbs. Each piece cross-talks. We try to understand the riddle of how the brain connects to different cells.”

Lieber also houses the country’s largest collection of brains with a known diagnosis of post-traumatic stress disorder, resulting in a strong partnership with the Veterans Administration to examine tissue for larger PTSD studies, in hopes of uncovering underlying molecular and cellular changes.

Having already identified several new targeted therapeutics, the Lieber Institute is pushing its genes-to-drugs pipeline strategy. Several drugs could be in clinical trials within the next three years, says Weinberger. Another four “promising leads,” he says, could produce two new drugs for phase II clinical trials by 2021.

The institute has also established the BrainSEQ Consortium, a pre-competitive collaboration with seven leading pharma companies, as well as an open-access, cloud-based tool for genetic analysis of the human brain. “We’re working to generate the largest known data set on brain disorders,” says Hyde. “This public archive of human brain gene expression data will enhance neuropsychiatric research at institutions around the world.”