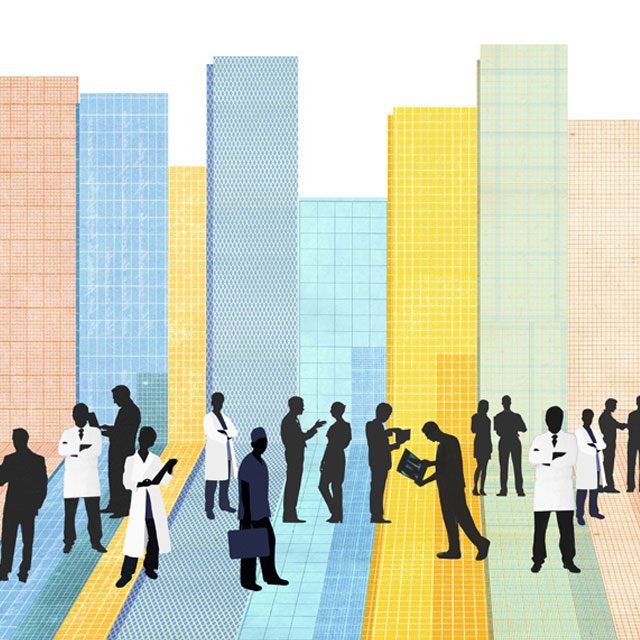 Each year, researchers in the school of medicine and other Johns Hopkins divisions make hundreds of discoveries, a sizeable proportion of which hold commercial potential. The Johns Hopkins Technology Ventures office helps researchers bring these ideas to market by offering business advice, support and space for startups.

Here’s the story of one successful startup, Clear Guide Medical, which offers novel computer-assisted ultrasonic technology to make precise needle insertions far easier than previously possible. Clear Guide ONE, a mere idea five years ago, gained Food and Drug Administration clearance this fall and is now being marketed for use in hospitals across the United States and Canada.

Stolka and Boctor confront the shortcomings of existing ultrasound tracking systems used to guide needle insertions into the body to biopsy tumors, insert central lines or deliver local anesthesia. Hand-eye coordination required to reach the target can challenge even the most skilled surgeons. There has to be a better way, they agree. They set out to find it.

“Eureka” moment comes in the summer on a train back from New Jersey. Sketching as they brainstorm, the duo comes up with a novel solution based on attaching local sensors—camera and projector—directly to the ultrasound probe. They submit their first key patent on this approach in November.

Boctor applies to Maryland’s TEDCO university program in the summer and a $50,000 grant comes through in December.

Team turns to the Whiting School of Engineering’s Greg Hager for expertise, who helps with computer vision questions—automatically processing the images from cameras to assist the physician. Dorothee Heisenberg, a Ph.D. with a finance background working at Johns Hopkins, joins the team and Clear Guide Medical, LLC is formed.

Team begins preparing device for success as a product. Dangling wires and other clutter are cut back; usability and durability are enhanced. “In academia, the device only has to work once,” Stolka says. “When you make a product, it has to work every single time.”

Team raises total of $1.55 million in grant funding, hires even more engineers. They spend $20,000 to attend Radiological Society of North America annual meeting to showcase new invention. Physicians swarm, bringing back friends to the Clear Guide booth to marvel. Essentially, Clear Guide reduces complex needle insertions into an act not much more difficult than playing a simple video game. Says one attendee: “This is the most exciting product I’ve seen in this field for a long time.”

September: Clear Guide receives clearance from FDA and Canadian equivalent to market ultrasonic guidance device. Champagne is uncorked. Manufacturing subcontractor hired to begin producing devices. Salesperson hired to handle first customers. Company makes plans to move out of FastForward. Johns Hopkins will hold small equity in firm and will be paid for licensing of patents invented by Clear Guide team during their time as academics.

The product’s revenue potential is significant. Heisenberg expects that in 10 years, every ultrasound device will include Clear Guide technology.