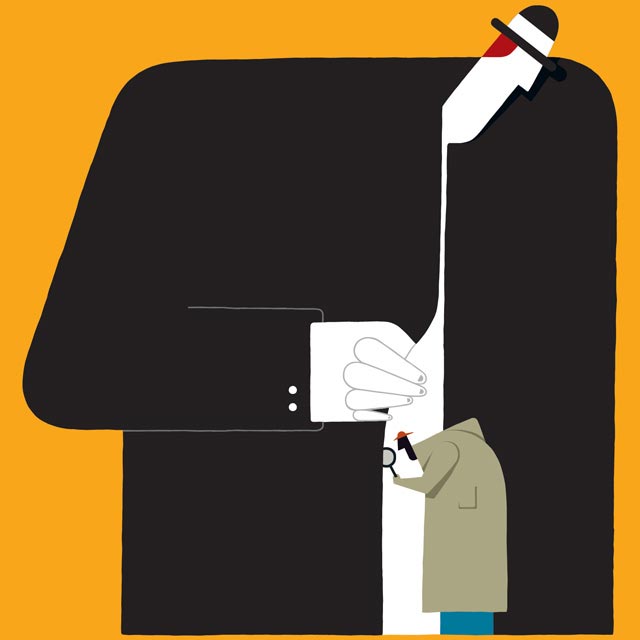 Motility difficulties can be maddeningly hard to pin down. Often, symptoms that manifest as gut troubles are actually signs of illness somewhere else.

Is a patient’s nausea related to gastric issues, or is the symptom the result of an allergy? Is her reflux caused by GI problems, or could it be the work of a rheumatic disease? When symptoms overlap specialties, patients can get lost in a maze of appointments, testing and crossed signals.

Enter the Johns Hopkins Center for Neurogastroenterology. Here, a team of physician detectives drawn from a variety of specialties—including pathology, surgery, psychiatry and gynecology—work together to puzzle over the clues and solve difficult-to-diagnose medical cases.

“For most patients with what we call functional GI disorders, nothing’s going to leap out of the endoscopy that says ‘here’s the problem,’” says Johns Hopkins gastroenterologist John Clarke. “Our center is designed to deal with problems we can’t solve with endoscopy or imaging alone.”

He and colleague Jay Pasricha relish the opportunity to join forces in tackling motility mysteries that have stumped some of the best in the country.

“In many ways, neurogastroenterology represents one of the last and most exciting frontiers in medicine,” says Pasricha, the center’s director. “The enteric nervous system, the brain inside our gut, is increasingly being recognized as a key player not only for digestive disorders, but also for metabolic conditions, such as obesity and diabetes, as well as anxiety and depression.”

Consider these four cases the team has cracked.

The Teacher Who Woke in the Night

By the time Sherry Jones (all patient identities have been changed) visited the neurogastroenterology center, she’d spent nearly half her life with a puzzling condition that could incapacitate her with no warning at all.

The 27-year-old teacher would wake up around 1 a.m. with powerful nausea and vomit every 10 or 15 minutes for several hours. It could happen once a month or once a week, at unpredictable intervals. Jones had been suffering this way since the age of 15. But between bouts of the unexplained illness, she felt fine.

Over the years, she’d visited both primary care doctors and specialists. They had looked for problems in her stomach and her intestines, but no one found anything out of the ordinary—and nothing brought relief.

It didn’t take long for Clarke to develop a theory. “Something jumped out at me when I heard her symptoms,” he says. “She showed some of the signs of cyclic vomiting syndrome.”

Though literature on the syndrome says nothing about the late-night onset of Jones’ episodes, many of the other symptoms fit. Jones even related a history of marijuana use in her teens. “Sometimes, but not always, cyclic vomiting syndrome can be associated with prior marijuana use,” says Clarke.

There were other symptoms that clouded the patient’s situation. But Clarke says the fit was close enough that he got her started on amitriptyline, “an old type of antidepressant that’s been around for a couple decades but that literature says shows a benefit for cyclic vomiting syndrome.”

Starting at 25 milligrams and increasing a month later to 50 milligrams, Clarke hoped the amitriptyline would break the cycle. In case it didn’t, he also prescribed transdermal antinausea patches in the event of an episode.

Five months after her first visit, Jones told Clarke that since starting the amitriptyline, the crippling nausea and vomiting disappeared. She has the patches but hasn’t needed to use one.

“This is the longest she’s gone between episodes,” Clarke says. “She had debilitating symptoms for 12 years. Now they’ve stopped.” 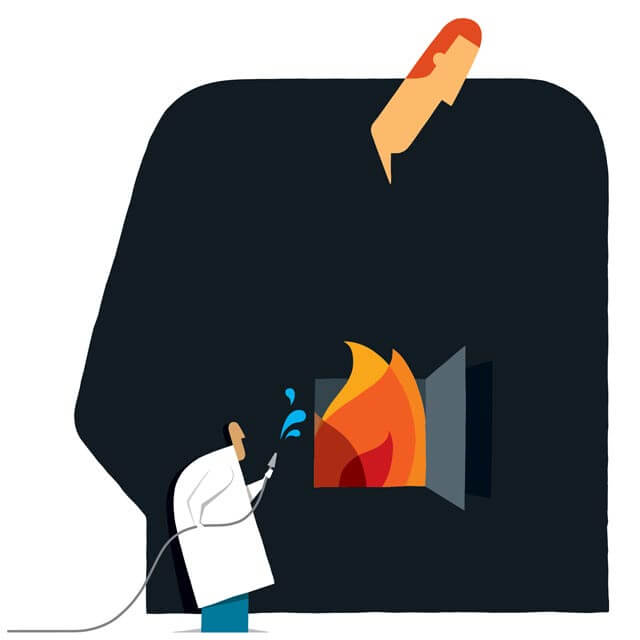 A Study in Swallowing

Ron Littleton’s heartburn was out of control.

Diagnosed with acid reflux disease, the 24-year-old had boosted his proton pump inhibitor medicine to twice, then three times, a day. But his heartburn became so acute he had to sleep sitting up in a chair. From time to time, his condition even made it difficult to swallow.

When he visited the neurogastroenterology center, Littleton’s existing diagnosis of refractory reflux didn’t quite add up, says Clarke. The fact that he had gained little or no relief from prescription-strength gastric acid reducers sounded more like a problem of physiology.

Littleton’s case had one more twist to it: He refused to have surgery, which could involve scars.

Clarke called on Bronwyn Jones, a gastrointestinal radiologist and director of the Johns Hopkins Swallowing Center. Jones performed a cine-esophagram, a swallowing study in which doctors use X-ray technology to watch a barium solution make its way down the esophagus, until it makes a gentle left turn into the patient’s stomach. "We look at all aspects of a patient's swallow,"she says.

Sure enough, Littleton’s esophagram pointed to important clues that would unlock the mystery. The Johns Hopkins team suspected his problems might have more to do with muscle spasms than with gastric acid. They performed an esophageal manometry test, which revealed the real problem: a condition called achalasia. The smooth muscle fibers in Littleton’s esophagus could not relax, causing weakness in his lower esophageal sphincter. The condition led to his severe reflux problems—and explained why proton pump inhibitors couldn’t bring him relief. 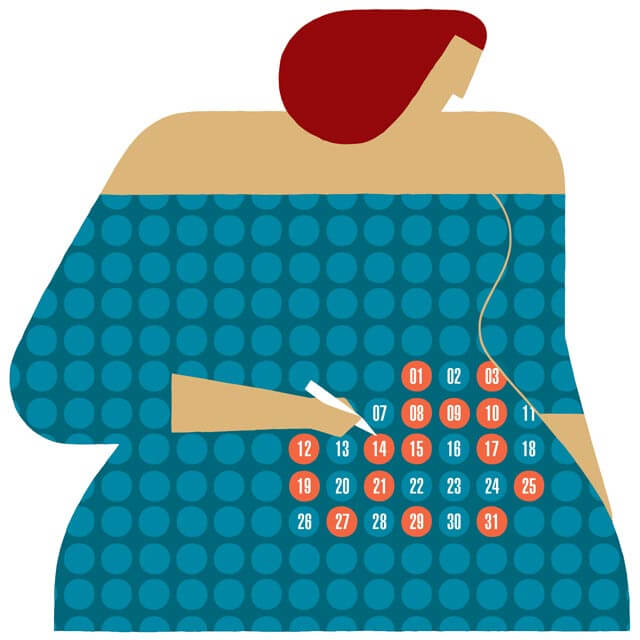 By 2013, 36-year-old Amy Rogers had seen at least three other GI doctors before she turned to the neurogastroenterology center. Once a month or so, she’d endure severe bouts of nausea, vomiting, diarrhea, abdominal pain and distention.

One doctor had suspected celiac disease, but when Rogers cut gluten from her diet, her symptoms didn’t improve. Another doctor believed that Rogers’ abdominal pain was coming from episodes of pneumatosis, a condition where gas gets trapped within the wall of the intestine. Her next set of doctors performed a laparotomy, looking for a potential intestinal perforation as the source. But they found none.

Rogers’ condition prevented her body from absorbing nutrition from food. Doctors put her on a medicine that suppressed her immune system. But after two more bouts of pneumatosis, a surgery to remove adhesions in her small intestine and finally, removal of part of her lower intestine, Rogers turned to the GI team at Johns Hopkins for help.

The team first put her through a full motility workup to see how well and how quickly food moved through her intestines.

Solving the mystery required some creative thinking. “Given that she’d already tried all the standard therapies, we had to look outside our own discipline,” says Clarke.

An answer came after Clarke ran a lab panel “that showed she had high levels of a particular antibody that was causing a lot of problems.” He concluded that Rogers’ small bowel troubles stemmed from antibodies found in the peripheral nervous system that inhibit intestinal contractions. “It’s a pretty rare situation,” he says.

Polydefkis asks his patients to keep a daily journal during their treatment, tracking their symptoms each day. After Rogers’ treatment began, she recorded many more good days than bad.

“She came back to Dr. Polydefkis this month and said this is the best she’s felt in years,” Clarke says.

Sometimes the diagnosis isn’t the toughest thing to crack—it’s figuring out the best treatment.

Since age 19, Emma Fuller averaged four hospital admissions a year. Her gastroparesis—in which the stomach empties too slowly or not at all—and the accompanying nausea would periodically become so severe that it sent her to the emergency room.

She saw numerous GI specialists but couldn’t find the cause of her gastroparesis. When she moved to Baltimore for graduate school, she scheduled an appointment with Clarke and the GI team.

“She ended up in the emergency room before her appointment came around,” Clarke says.

He and his colleagues tried many of the standard therapies for gastroparesis, such as powerful prokinetic drugs designed to promote digestive motility. “And we tried options that were more experimental, like Botox injections into the pylorus,” he says. “Nothing brought her relief.”

Finally, Clarke asked Frederic Eckhauser, interim chief of the Division of Colorectal and Gastrointestinal Surgery at Johns Hopkins, to perform a surgical placement of a gastrostimulator, a device designed to deliver an electrical impulse to the nerves and muscles of the lower stomach.

“In theory,” explains Eckhauser, “a current is transmitted through the autonomic nerves that supply information to the stomach, back toward the spinal cord and up into the central cortex of the brain, where it stimulates the center that controls nausea and vomiting. It seems to suppress that center, and it controls the symptoms of nausea and vomiting these people experience.”

“That was six years ago,” says Clarke. “And she hasn’t had a hospital admission since.”