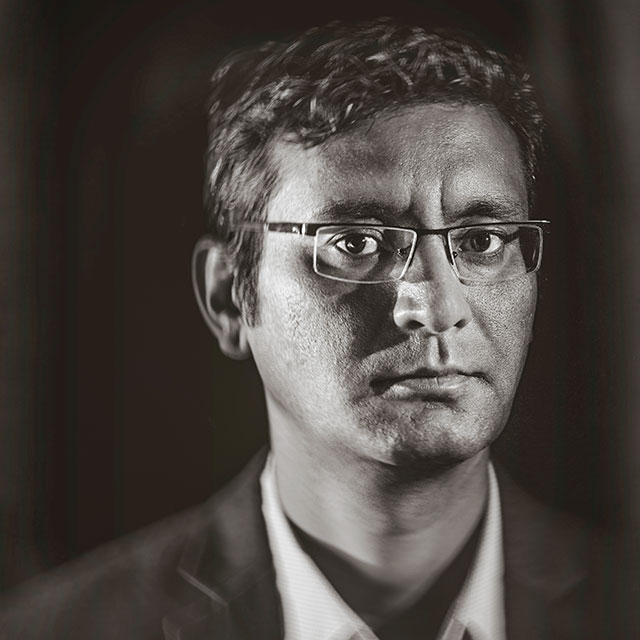 When he was a senior in high school, Kunchok Dorjee developed a nagging cough and began to worry. Tuberculosis was rampant in the Tibetan refugee boarding schools he had attended in Dharamsala, India, since age 9, and he witnessed many classmates stricken with the disease. He lived with the knowledge that thousands of Tibetan transplants, including his own grandfather, had died from the lung condition.

But Dorjee was lucky. It turned out his cough was the product of a common cold. So instead of heading to his school’s infirmary for several months to begin treatment for TB, he returned to classes to continue his studies, his eyes set on the goal of ultimately becoming a physician.

Today, more than two decades later, Dorjee is leading a team that is working to eradicate tuberculosis among Tibetan children in the very schools he attended. Equipped with an M.D. and Ph.D., the Johns Hopkins research associate is director of the Zero TB in Tibetan Kids initiative, which launched in 2017. The project’s goal: to screen for, treat and prevent TB in more than 20,000 children and school staff members across Tibetan schools in several states of India, where nearly one in five Tibetan children has the infection. Among boarding schools, TB rates are five to eight times higher than the average for the country or worldwide.

[In Dharamsala] the TB ward overflowed with patients, prompting Dorjee and his colleagues to place extra beds in the hallways or have two patients share a bed. “It was a really challenging situation, with many drug-resistant cases,” he says. 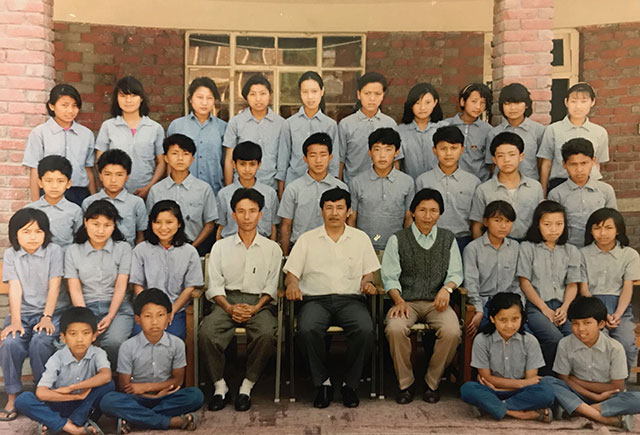 School days in Dharamsala. In the class photo, Kunchok is in the middle row, fourth from the left.

“I really believe that with a collective and strategic effort, we can eliminate TB in the Tibetan population living in exile,” says Dorjee, who works closely with Richard Chaisson, director of the Johns Hopkins Center for Tuberculosis Research, and partners at Delek Hospital in Dharamsala, the University of Wisconsin, and the Central Tibetan Administration departments of Health and Education. The team faces an uphill battle: TB rates among Tibetan exiles are three times higher than rates in India as a whole and more than 150 times higher than in the United States.

Dorjee was born in 1979 into a Tibetan refugee settlement area in Chauntra, in northern India. His parents, like many others, had fled Tibet in the late 1950s after China invaded the country. Teenagers at the time, they spent months traversing the long distance to India on foot with their families, often battling hunger and frostbite. The sheep and yaks they used for currency perished during their winter journey.

Shortly after resettling, one of Dorjee’s grandfathers died of a persistent fever, cough and blood in the sputum. “At the time, the cause was not known, but looking back in hindsight, it was clearly tuberculosis,” he says.

In India, Dorjee’s parents, and thousands of other Tibetan refugees, encountered an environment ripe for the airborne transmission of TB: exposure to a new country’s environmental conditions and infectious diseases, coupled with poverty, cold winter weather and congregate living. More than half of the Tibetan population resides in congregate settings, such as boarding schools, monasteries and nunneries. They typically didn’t have access to the powerful types of antibiotics required to knock out the infection, and some strains became resistant to drugs.

Around the time their son, an only child, reached third grade, the Dorjees made the decision to send him to boarding school at the Tibetan Children’s Village (TCV) School in Patlikuhl. It was eight hours from his home by bus. “Most parents [sent their] children to boarding schools because it was hard to care for children and at the same time do roadside work that most Tibetans did then,” he explains. After eighth grade, young Kunchok transferred to the TCV schools in Dharamsala, the city that was headquarters of the Dalai Lama and the Tibetan government in exile. Despite the teachers’ dedication to the students, Dorjee recalls, “basic health needs were not met, and infectious diseases were rampant.” His interest in becoming a doctor was gradual, he says. He admired volunteer physicians who came to aid the refugees, and during the weeks he was at home with his family, he witnessed hospital physicians treating his mother with kindness during various ailments.

After high school, he trained at Indira Gandhi Medical College in Shimla, completing his medical education in 2004, then returned to Dharamsala to join the staff of Delek Hospital as a medical officer. During the three years Dorjee worked there, he says, “I saw that infectious diseases were really the major health care problem people were facing. The community clearly lacked the infrastructure to deal with it. The public health mindset was not there.”

The TB ward overflowed with patients, prompting Dorjee and his colleagues to place extra beds in the hallways or have two patients share a bed. “It was a really challenging situation, with many drug-resistant cases,” he says, with cross-reactions likely happening because patients whose disease did respond to the drugs were staying in the same place. “I’m sure they were infecting each other, but there were no resources to take care of it.” Dorjee knew he needed additional training in public health. So he applied for—and won—a Fulbright scholarship to study at Stony Brook University in New York in 2008.

Around the same time, two of the Dalai Lama’s physicians came to Johns Hopkins to discuss heart disease. When cardiologist Alan Heldman discovered that the Tibetans’ main health problem was TB, he referred them to Chaisson. Internationally renowned for his expertise in TB control, Chaisson recognized right away that there was a problem, and he reached out for support from Johns Hopkins Medicine International to send a team to Dharamsala for review. Over the next several years, as Chaisson subsequently worked with Delek Hospital physicians on a comprehensive TB control plan, the physicians recommended that Dorjee run it.

Zeroing in on Kids

“[Kunchok] understands the best interventions, but more importantly, he understands the population, their culture, the historical context of Tibetan exile and all of the things about refugees that promote infectious diseases.”

Dorjee was only too happy to make the program his focus. So, in 2010, he returned to Dharamsala. He spent the next three years improving the TB program for Tibetan refugees by setting up diagnostic and treatment protocols, developing active case finding programs, and establishing surveillance systems to monitor for drug-susceptible and -resistant TB, which were rolled out to other states in India. The work not only lowered TB rates but also improved the cure rate from around 60 to 70 percent to well over 90 percent, exceeding all global expectations for how programs are supposed to perform, according to Chaisson. 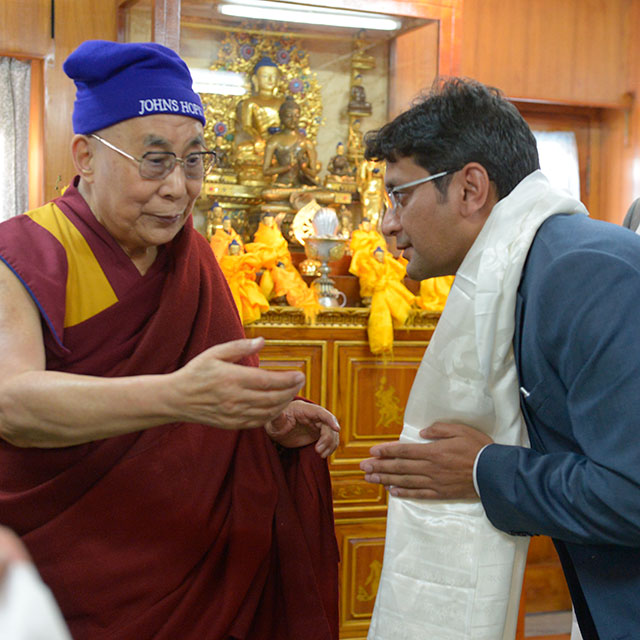 Dorjee receiving a blessing from the Dalai Lama 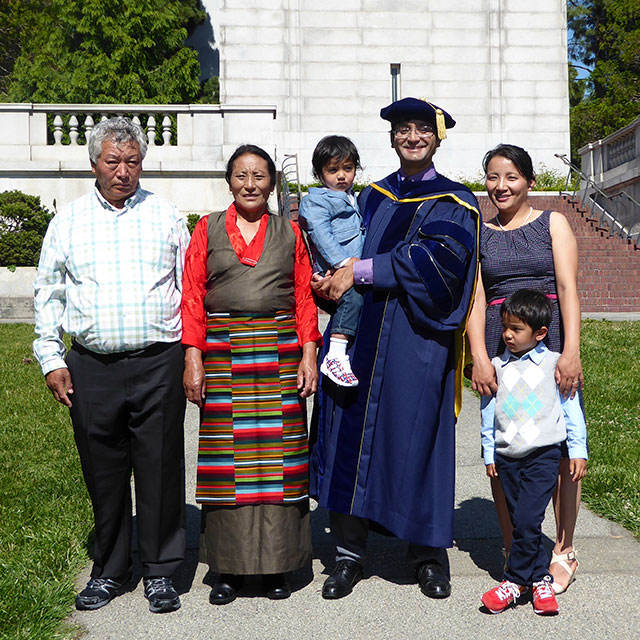 Dorjee on graduation day with his parents, wife and children, at Berkeley 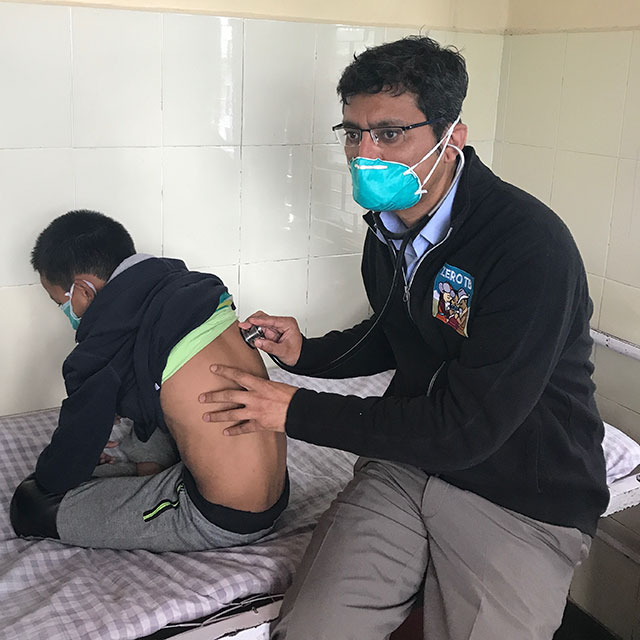 Treating a young patient in Dharamsala 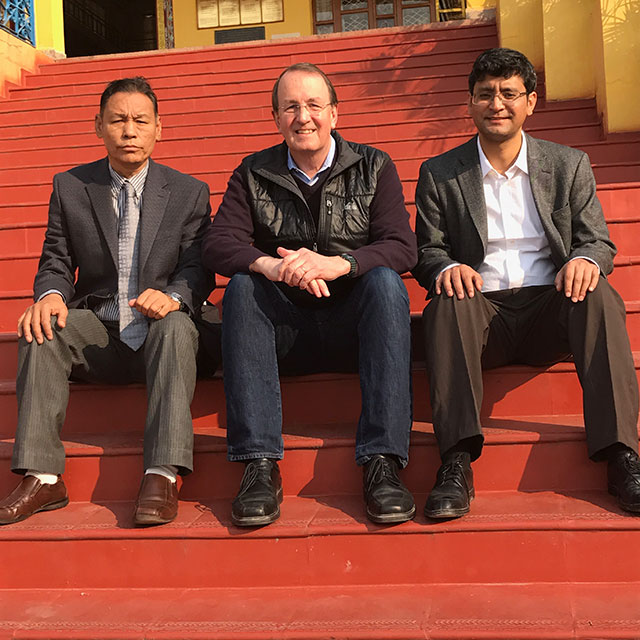 Dorjee then pursued doctoral work in epidemiology, gaining acceptance to the University of California, Berkeley. While he finished his dissertation, the University of Wisconsin identified funding to support additional work in Dharamsala. Chaisson pushed for eliminating TB in children, and hired and mentored Dorjee to direct this new project. With the University of Wisconsin’s connections, the team was granted an audience with the Dalai Lama, who approved the idea and participated in a video public service announcement asking all schools and workers to support it. The Zero TB in Tibetan Kids initiative was born.

Initially, school staff seemed overwhelmed by the screening and treatment program, says Dorjee, especially as latent TB infection and preventive therapy were new concepts for the community. “They were baffled by the idea that a disease accepted as universal could be stopped,” he notes. So Dorjee worked with them to break it down to simple steps, focusing first on screening one classroom of children and staff members; asking about TB symptoms, such as cough, fever and night sweats; and interviewing them about their history of exposure to the disease. Those presenting with TB symptoms were further evaluated using chest X-ray and laboratory testing, while people with no prior history of TB underwent tuberculin skin testing to measure latent TB infection.

When that was completed, the team moved to another classroom until it had an entire school screened. From there, it expanded to seven boarding schools and four day schools. Dorjee and the Zero TB in
Tibetan Kids team at Delek Hospital also tapped into a valuable resource: “home mothers” living in each school dormitory, whose responsibility it was to look out for the welfare of students. They agreed to make sure children diagnosed with latent TB infection took their medicines—crucial, because without compliance, these children would be at risk of progression to active TB disease.

Under Dorjee’s direction, program staff members screened 5,391 schoolchildren and 786 staff members in a single year (April 2017 to March 2018). They found active TB in 46 children and one staff member—for a prevalence rate of 853 per 100,000, which far exceeds the general TB prevalence of 204 per 100,000 in India. Perhaps even more importantly, the team also detected latent TB in an additional 930 of 5,234 children (18 percent) and 334 of 634 school staff (53 percent), and provided TB preventive therapy to 900 children and staff. “Children and staff who have recently acquired TB infection have higher risk of progression to active disease,” he says. “Preventive therapy can prevent progression to active disease and stop the spread of disease.” These findings were published last November in Clinical Infectious Diseases.

Through a systematic effort, all those found to have active TB were treated with a six-month course of antibiotics, while those with drug-resistant TB received a prolonged course of combination therapy. Meanwhile, those with latent TB were given a three-month course of daily preventive therapy.

While treatment adherence remains a challenge in many populations impacted by TB, nearly 95 percent of participants in this study successfully completed their drug regimen for TB prevention—a hallmark attributed to Dorjee because of the buy-in he built in the program among the school community.

Screening and treatment efforts continue. Last March, with funding from the Johns Hopkins Alliance for a Healthier World, Chaisson accompanied public health students to Dharamsala to interview schoolchildren about how they wanted to receive information about tuberculosis. “The students responded that they wanted to get their information from experts, and the person they trusted most was Kunchok,” he says. “He understands the best interventions, but more importantly, he understands the population, their culture, the historical context of Tibetan exile and all of the things about refugees that promote infectious diseases.”

Dorjee now is focusing on TB transmission. Dividing his time between working in India and back in Baltimore at Johns Hopkins, he is applying whole-genome sequencing to samples to study how it spreads within Tibetan schools or from students’ homes to schools to figure out how best to interrupt the process. “This summer, we are scaling up our work into the monasteries and nunneries in southern India,” he says. “And I am also working on promoting and highlighting female leadership and women empowerment within our program and related operations.”

Zero TB in Tibetan Kids was “a new concept, but people saw hope in it,” Dorjee says. “It was really rewarding to go back and serve the schools that taught me.”