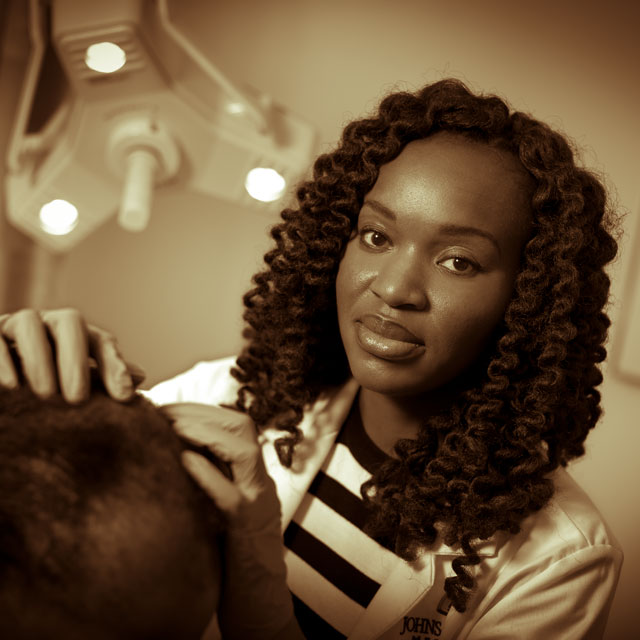 Dermatologist Crystal Aguh studies lifestyle factors affecting hair loss in ethnic populations—an area where most dermatologists fear to tread. She speculates that’s because dermatologists, the vast majority of whom were never exposed to the topic in medical school, are often “nervous on how to approach treatment.”

This failure to communicate is particularly devastating to African-American women, as nearly 50 percent of them suffer some kind of hair loss. Studies suggest a significant portion of middle-aged African-American women feel their hair is “unhealthy”—perhaps due to experiences involving hair care and styling—and that these concerns lead many to avoid exercising, so as to protect their existing hair.

Few of these women discuss their hair and scalp issues with their doctors, says Aguh, and those who do are often dismayed at their physicians’ lack of knowledge about common African-American hair issues. These include dryness, breakage and fragility—the result of curly hair that is farther away from the scalp’s natural oils than straight hair.

“Hair loss seriously impacts self-esteem and quality of life,” says Aguh, who became the Department of Dermatology’s first African-American chief resident in 2014 and is now an assistant professor. “I always make sure to bring in a box of tissues when I’m talking with my hair loss patients. It really affects their entire being.”

One common type of hair loss that almost exclusively affects African-American women is central centrifugal cicatricial alopecia (CCCA). It’s a permanent, scarring type of balding involving chronic inflammation radiating outward from the crown of the scalp. There’s no cure or effective treatment yet for CCCA—though Aguh is studying the same kind of new, platelet-rich plasma injections that other researchers are investigating for their possible use in treating inflammatory issues, including tendon injuries and arthritis.

Still, Aguh can work with patients to keep a difficult situation from getting worse. “With CCCA, the worst hair loss comes in the middle of the scalp, but tight braids will pull out hair in other places (notably the front and sides of the scalp). Because there are no great CCCA treatments, I want them to max out their hair everywhere else. People who want to camouflage their hair loss want to know how styling can come into play. So every patient I see with hair loss gets this discussion,” she says.

As one of less than a dozen dermatologists nationwide specializing in hair care, Aguh treats more than 200 women a year (and some men) concerned with their hair loss and damage. Often, they come in frustrated: They may have a dermatological scalp condition for which their specialist has prescribed a shampoo with instructions to use it every day—the physician being unaware that daily shampooing often destroys curly hair (another effect of the lack of natural oils).

“Basic styling isn’t part of any medical school dermatology curriculum, though it should be. If someone has permanent hair loss and dreadlocks, the average dermatologist would focus on giving them steroid injections or steroid creams. But no one will ask them how often they see their locktician and the kind of different, looser dreads they could switch to that won’t cause hair loss,” says Aguh, who recently co-authored (with Johns Hopkins dermatologist Ginette Okoye) Fundamentals of Ethnic Hair: The Dermatologist’s Perspective (Springer, 2017).

The textbook covers basic science—including a comparison of the chemical and physical properties of Asian, black and Caucasian hair—and discusses hair styling and its roots in cultural and religious concerns.

“Our book was, in part, aimed at increasing dermatologists’ awareness of routine, common styling practices among our patients,” says Aguh. “That’s [been] a nonstarter based on existing curriculums.”